Who Are the Most Attractive NBA Players? 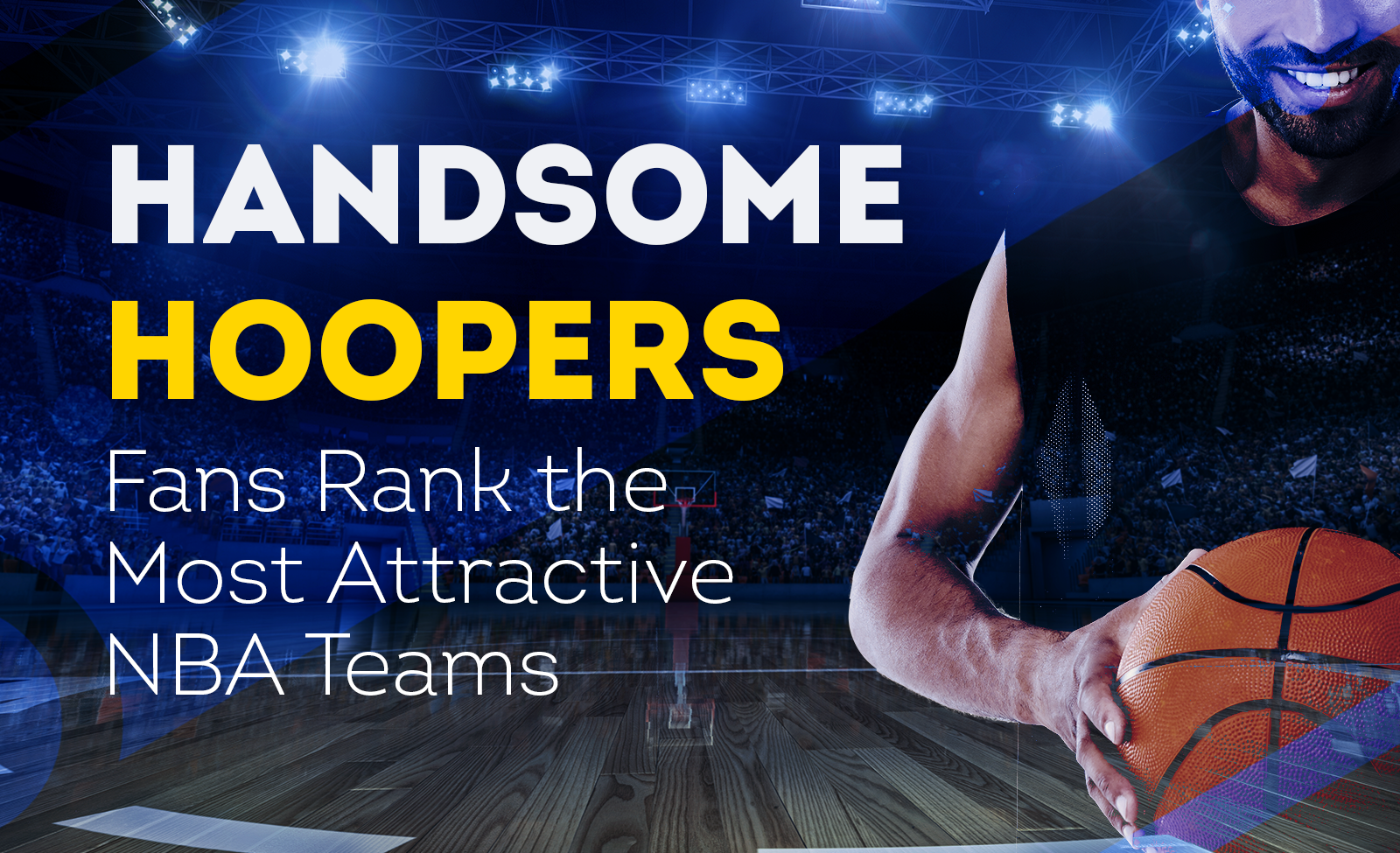 Who Are the Most Attractive NBA Players?

It’s hot to be a professional athlete. The age-old trope of the good-looking jock has ingrained itself into our culture for a reason. Our society’s definition of the “perfect man” typically involves traits found in most athletes: Tall and physically fit. From an evolutionary standpoint, this logic adds up; get yourself a strong man, and you’ll have strong babies. Who doesn’t want that? Looking past this innate human desire to reproduce, however, there are other qualifiers that drive our society to claim someone as “hot” or “not.”

We at BonusFinder wanted to explore these qualifying elements more closely in the context of professional sports, so we honed in on one of the most popular professional sports leagues in the U.S.: the NBA. We gathered over 15,500 votes on nearly 500 players to see which players, teams, and positions are deemed the most attractive – keep reading to see if you agree.

The Most Attractive Players

Who do people think are the hottest players in the NBA? Find out below … 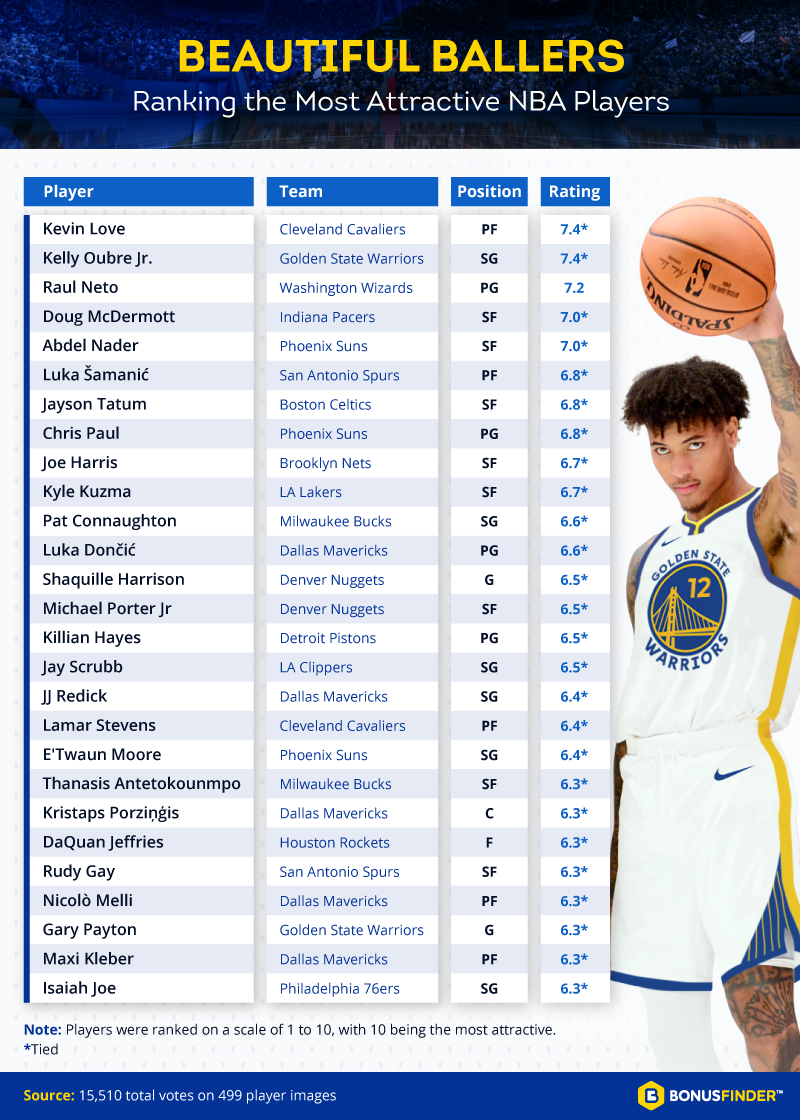 Not so surprising for the list of top NBA players are the MVPs themselves, Kevin Love of the Cleveland Cavaliers and Kelly Oubre Jr. of the Golden State Warriors (7.4 each). One with the jawline of a Hemsworth and the other with boy-next-door good looks, what more could you ask for? It also doesn’t hurt to be a five-time all-star with an NBA championship title and a name like Love. And to add to that already impressive list, Love received the Humanitarian of the Year Award at the 21st Greater Cleveland Sports Awards this year. Following closely behind these two is Raul Neto of the Washington Wizards (7.2) and Doug McDermott of the Indiana Pacers (7.0).

We explored attractiveness in the NBA by teams for this next batch of ratings – it is a team sport, after all. Check below to see if your team made the cut.

From the responses we received, the Dallas Mavericks and the Portland Trail Blazers both blaze a trail straight to the top with average attractiveness ratings of 5.5.

Following those two are the Cleveland Cavaliers (5.4) in second place and the Golden State Warriors tying with the Phoenix Suns for third (5.3). With the Cavs and the Warriors frequenting the lists of data we collected, they are certainly ones to keep an eye out for.

Best in the West

First off, we have the Western Conference. The West is always known to bring the heat on the court, but how do they compare off the court?

The Dallas Mavericks stand out as the only team to have all top five players score above a 6.

The Golden State Warriors are not backing down either, with the starting roster scoring a 5.9 and higher, highest of which is our boy-next-door Kelly Oubre Jr., scoring 7.4 out of 10.

The Phoenix Suns are still in the game though, with Abdel Nader being the only other Western Conference player to score a 7.0 or higher.

Sexy Beasts of the East

Next up is the other side. The Eastern boys have some heavy hitters that it would be tragic to overlook. Discover their ratings below.

Some of these men have a good look, others have a great look, but only a few have “the look.” These Eastern teams seem to work best with an MVP and some good solid backup, with many of them having a heavy hitter (6.0 or above) and a supporting cast of 5s or below.

Crushing this list is the cream of the crop, Kevin Love (7.4), with teammate Lamar Stevens (6.4) helping to give the Cavs a pretty heavy lead. The Washington Wizards are also in a very good position, pushing close to the top with Raul Neto (7.1) and Daniel Gafford (6.1)

The Indiana Pacers have one heavy hitter in Doug McDermott (7.0), but they need to pick it up if they want to be on top.

And let’s round out the East with two more beautiful teams, the Milwaukee Bucks and the Philadelphia 76ers. The Celtics and the Nets have very close numbers, but our boy Jayson Tatum (6.8) pulls ahead with the help of his other men, all of whom scored a 5.5 or higher.

The Nets are still one of the leaders in this conference, though, with Joe Harris scoring a steamy 6.7, and his fellow top teammates all scoring a 5.2 or higher. New York is one of the sexiest cities in America, so it’s no wonder these men are keeping up with the best of them!

Pleasing to the Eye Positions

If you ask us, we love a good point guard. Superb agility, shooting ability, and usually, a great look. Stephen Curry, Magic Johnson, Chris Paul, these all-star men have it! But what does everyone else think? 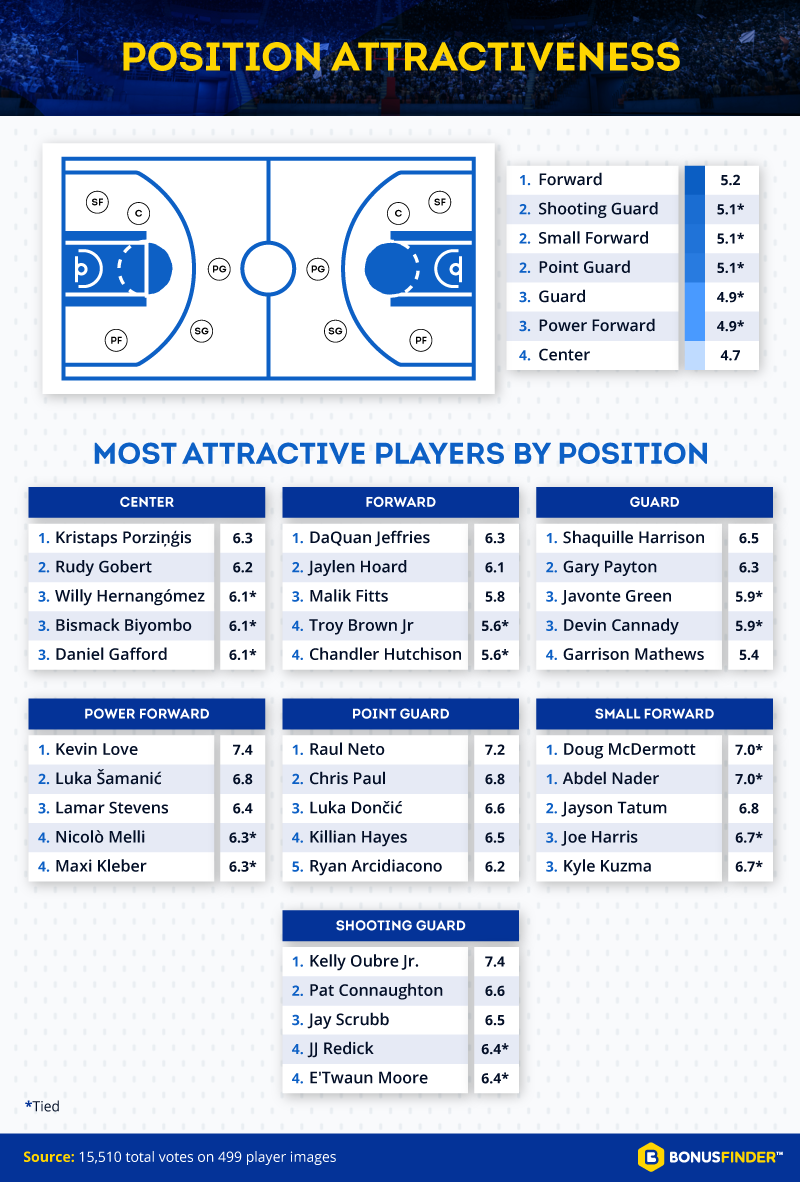 According to our data, the most attractive position in the NBA is the forward (5.2), with DaQuan Jeffries (6.3) leading the charge. Following that is a tie between the shooting guard (5.1), the small forward (5.1), and the point guard (5.1).

If we judge by the rating of the top five in each position, we get a somewhat different outcome. The small forwards seem to be the highest rated individually, with no one rated lower than a 6.7 in the top five. Doug McDermott (7.0), Abdel Nader (7.0), Jayson Tatum (6.8), Joe Harris (6.7), and Kyle Kuzma (6.7) make up the top slots and, with the exception of Kuzma, have all been mentioned in this article already.

When it comes to the NBA, everyone’s a winner. These players get paid the big bucks to play a certain way, act a certain way, and, yes, look a certain way. Most of these men develop their own style, making each of them unique in their own right. The NBA shows you the most these men have to offer. Whether it’s their ability to get a ball through a hoop or their stone-cold good looks – they grab our attention.

So, this may not change the way you set up your fantasy basketball league or even how you will bet on your teams to win. But, if you did want to bet on your sexiest basketball player, look no further.

At BonusFinder.com, discover all the best bonuses to cash in across all legal casinos and online betting sites in the U.S., as well as tons of industry insight and other gambling-related tips and tricks. Head over now to start your moneymaking journey off on the right foot.

For this study, we compiled a list of active players and their respective positions from ESPN. To measure player attractiveness, we gathered 15,510 votes on 499 player images and calculated an average rating using a 10-point scale.

If you love to love your players, if you simply can’t resist a good contest, or if you have friends or family members that might get a kick out of it, feel free to send this article their way. We just ask that you do so for noncommercial use only and to provide a link back to the original page so contributors can earn credit for their work.