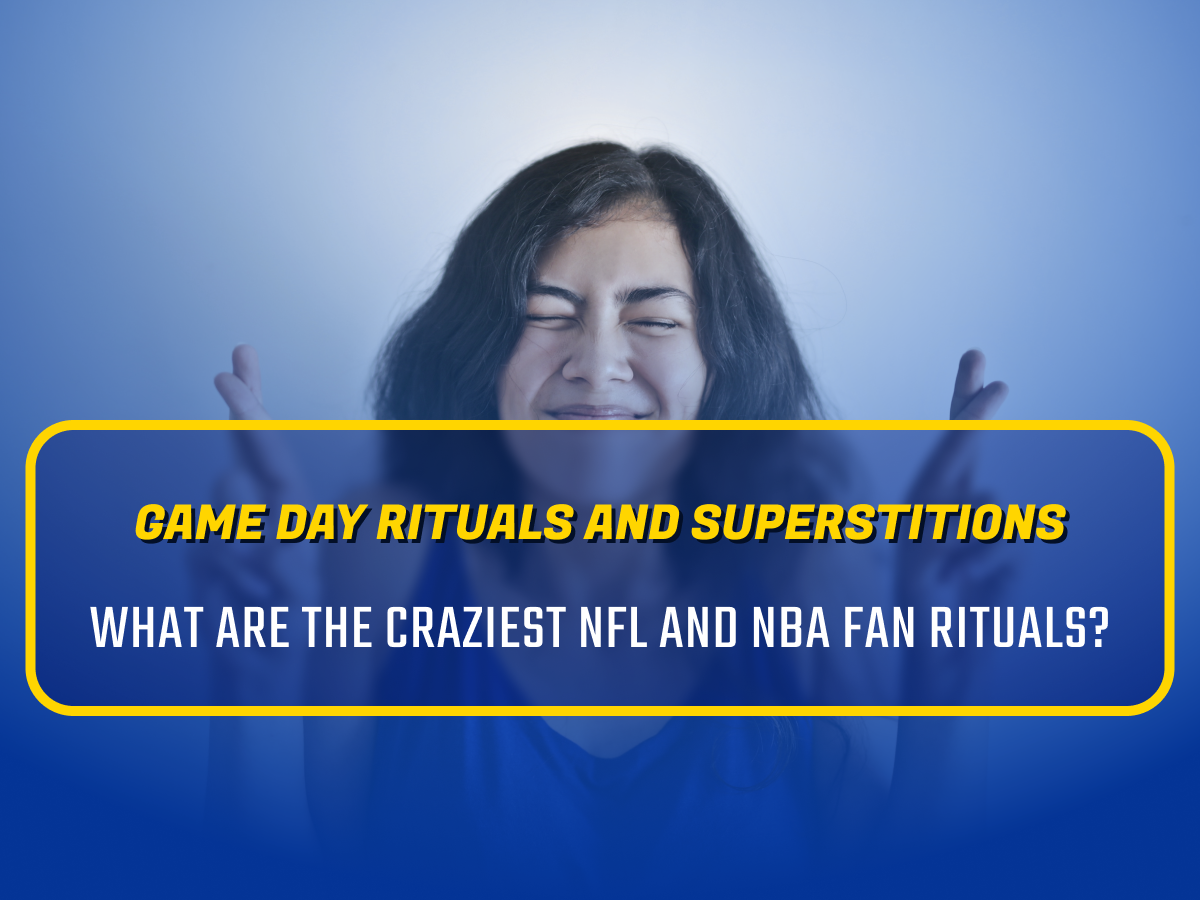 We all have our superstitions, whether it’s avoiding cracks in the sidewalk or refusing to step under ladders, most of them become habits that blend into our everyday lives, even if we don’t really believe in them.

Saying that, there are definitely some believers out there! In the world of sports in particular, many rituals and superstitions keep athletes feeling grounded and prepared for a game. Well-known athletes’ rituals include Tiger Woods’ lucky red shirt and Rafael Nadal’s neatly lined up water bottles.

It’s not only athletes who have their superstitions and rituals, though. Dedicated fans will do anything to ensure their team wins, even if their actions seem like they have little consequence to the game.

As the biggest sports in the US, it makes sense that basketball and football fans would have the most interesting pregame rituals.

We wanted to find out the wildest NBA superstitions and compare them with the crazy NFL fan rituals. To dive into the details of who really believes what, we’ve surveyed 1,000 of you!

Who has the weirdest and most extreme superstitions, which states have the most dedicated fans, and does anybody really dress up in a green morph suit to ensure their team wins?

Since many rituals are passed down as game day family traditions from older generations, it would be rational to think that older fans would be the most superstitious.

But out of those we surveyed, it turned out that 25 to 34-year-olds were the most likely to perform pre-game rituals! 96% of them claimed to be superstitious, while only 66% of 55 to 64-year-olds did.

Perhaps the longer you follow your teams through their leagues and tournaments, the more you realize that you sadly can’t affect the results. Though there’s no harm in trying!

NBA vs NFL: which fans are more superstitious?

We asked NFL and NBA fans how superstitious they were, as well as which rituals they performed before their teams’ games.

A huge 99.3% of NFL fans said they were superstitious, while NBA fans came just below with 97.9% of them being superstitious. Either way, that’s a lot of pre-game fun to find out about! So, what are the differences between them?

How do NFL fans prepare for a game?

In the NFL, the Las Vegas Raiders fans were the most superstitious. At the more rational end of the scale, just over half of the New England Patriots fans we surveyed performed game day traditions.

An astonishing 57.14% of the ‘Raider Nation’ admitted to this trait; all in the name of providing their team with a greater chance of success.

Ohio’s own Cleveland Browns fans are another group who try not to watch a game with a family member who they see as bad luck. Perhaps these family members like to wash their jerseys or don’t enjoy their same lucky song. Maybe they just shout too much – we aren’t sure what makes them so unlucky.

Minnesota Vikings fans had the biggest variety of NFL pregame rituals out of the ones we surveyed. They said that they would:

– Watch the game with a specific person
– Have the same meal each game day
– Wear a lucky item of clothing
– Avoid stands and seats with the number 13
– Not eat a certain food.

Interestingly, half of these rituals seem to be about not creating bad luck, rather than creating good luck. It makes sense that if you believe in your team, all you want is to make sure nothing goes wrong.

Which NBA fans have the weirdest rituals?

The most superstitious NBA fans we surveyed were those who support the Phoenix Suns. 100% of them said they were superstitious! Meanwhile, the Washington Wizards fans were the least believing as only 60% claimed to be superstitious.

The Phoenix Suns fans were also the most likely to leave their underwear unwashed, avoid eating a certain food, and go to a bar or tailgate party. That’s a lot of dirty underwear.

In fact, Suns’ supporters topped the charts in both the NBA and NFL for this peculiar (and gross) method. Just over 70% of respondents admitted their guilt!

Unlike the Cleveland NFL fans, Ohio’s NBA fans of the Cleveland Cavaliers were most likely to watch the game with a specific person, instead of avoiding them.

Once again, Minnesota fans knock it out of the park for variety. Fans of the Minnesota Timberwolves are doing all that they can to bolster good luck for their team. Their popular rituals include:

Almost all of the game day traditions we found out about involve luck, either directly or indirectly. Despite maybe knowing that who you watch the game with won’t make your team win, rituals are something that so many athletes and fans find comfort in.

Whether we are superstitious or not, game day traditions can help us feel that little bit more in control even when we know that anything can happen on the day.

Alongside a failure to wash basic clothing necessities, a few other methods of good luck caught our eye. Green Bay Packers fans are currently suffering from a torrid season, so the 41.18% of cheeseheads who admitted to wearing a pair of lucky underwear probably need to find a new superstition.

Wearing team jerseys on gameday is often a cause for debate between US sports fans. Followers of the Indianapolis Colts responded with the most enthusiasm when asked if they have to wear a team jersey on Football day; 62.50% feel as though they have to wear the famous blue shirt.

Methodology
Our findings are based on an extensive survey of 1,000 US sports fans. We conducted the survey in October 2022, then analyzed the results to find out the differences between ages, sexes, sports (NFL and NBA), and teams.