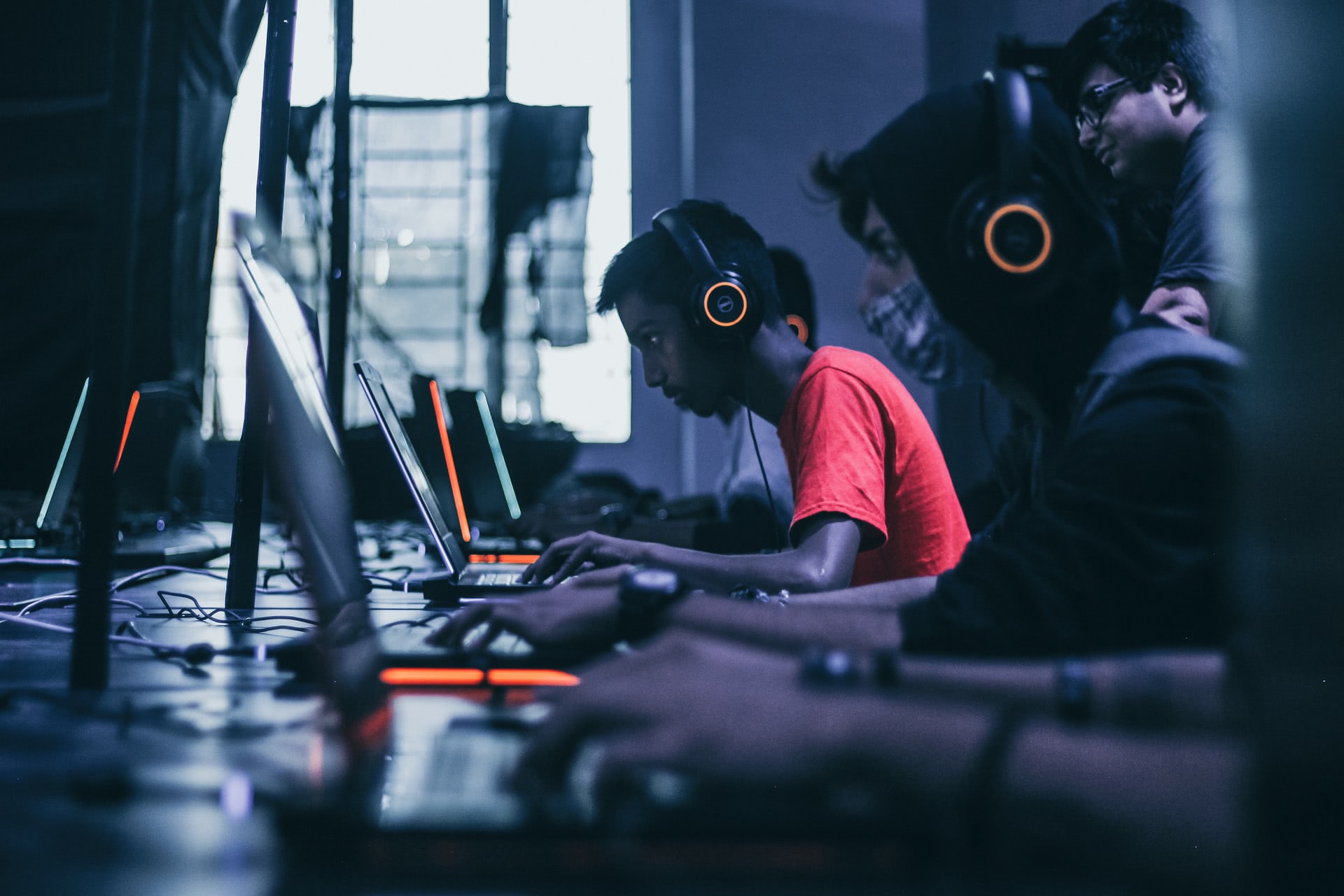 But have you ever wondered which titles are the most stressful and physically taxing to play?

To find out, the team at BonusFinder.com sourced 14 active gamers* and measured their heart rates when playing 16 of the most popular and challenging console, PC and mobile games on the market.

Here are the results…

The Most Stressful Games Revealed – By Average Group BPM Increase

It’s official, Mario Kart is the most stressful game to play based on average heart rate increases throughout the course of a 30-minute gaming session.

With heart rates elevating by an average of 21 BPM, this represents an increase of 32.81% on the group average resting heart rate of 64 BPM – it’s also the physical equivalent of going for a gentle walk, but still considerably less than the heart reat increase when sports betting, which can be up to 75%.

Closely following behind in second place is FIFA 20 with participant heart rates increasing by an average of 20 BPM (31.25% up on resting level). 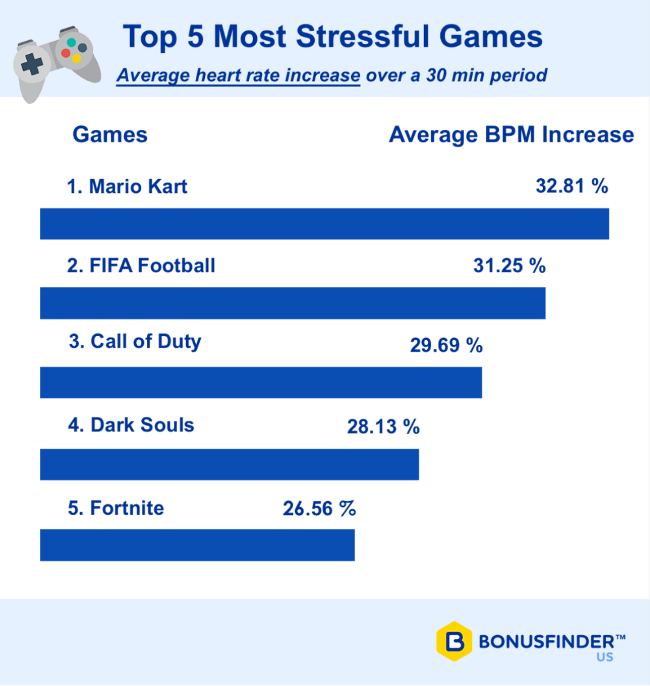 The Most Stressful Games Revealed – By Peak BPM Increase

While average heart rate increases throughout each gaming session provide a good indication of overall stress, this data doesn’t tell the full story.

With online and single player games having elimination rounds, finals and spikes in difficulty, we also tracked the peak BPM increases across participants to measure which games can produce the most stressful moments.

Dark Souls III Reigns Supreme, But Not by Much

When going up against the boss of Darkeater Midir in Dark Souls III, participant heart rates peaked as high as 127 BPM – a 98.44% increase on the group baseline resting rate of 64 BPM, showing just how challenging single player boss fights can be.

While we expected to see Dark Souls III at the top or very close to it, we didn’t expect second place to be occupied by Fall Guys.

Launched only a couple of months ago, the viral indie game hit allows players to compete in an online multiplayer battle royale, inspired by hit TV shows Total Wipeout, Takeshi’s Castle and It’s a Knockout.

When participants reached finals of respective Fall Guys episodes, heart rates soared by as much as 63 BPM, almost double the baseline rate. Representing an increase of 95.31% upon resting heart rates, people really want to win those crowns. 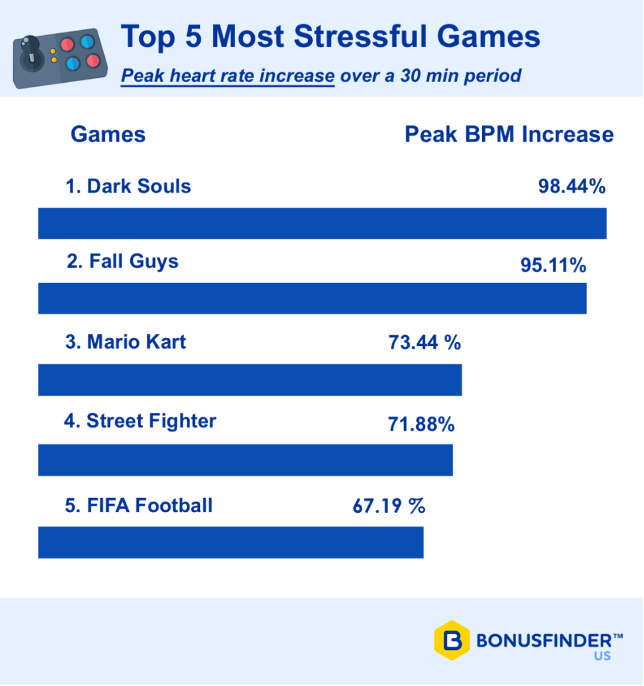 Not All Stressful – Most Relaxing Titles

It’s not all a case of gamers being stressed out of their brains, desperately trying to complete levels and win matches. We noticed a handful of titles actually resulted in the lowering of heart rates and stress levels.

Animal Crossing, The Sims and Skyrim were all found to lower participant average heart rates throughout the course of a 30-minute session, by as much as 5%. This would explain their popularity, as while competing to win games can be very fun and rewarding, sometimes all we want to do after a hard day’s work is unwind, explore and de-stress.

Methodology – How Did We Test This?

*We sourced 14 gamers who stated they were highly engaged in videogames, played for at least 15 hours per week and were familiar with the titles in our shortlist.

Each gamer wore heart rate monitors that tracked their heart rates over time and allowed for the collection of data via a bulk export. 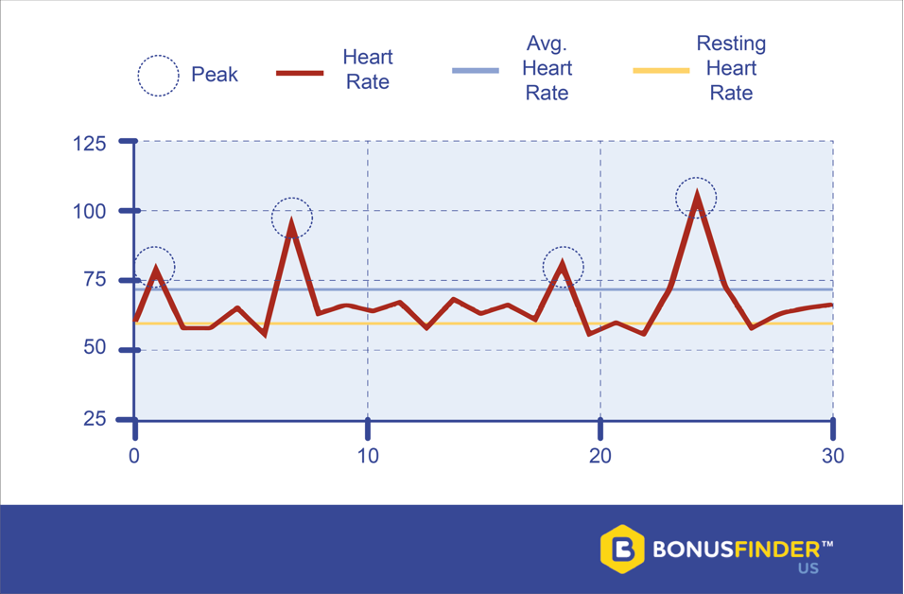 We measured resting heart rates for a baseline comparison and recorded heart rates at 10 second intervals for each gamer.

The data was averaged out across all participants who played each game to ensure no outliers or anomalies skewed the results.

While we had multiple peaks in heart rates, for the purpose of this study we took the highest peak of each participant per game, then averaged this out across the total number of participants (14) to get our final figure.

The full list of games played for a maximum of 30 minutes were: