Fire, Theft, and Damage: The Most Epic Sporting Celebration Fails

The dream for many athletes is to lift prestigious trophies, but once in their hands, fear takes over with the potential of dropping and damaging the potentially priceless pieces. BonusFinder collected a selection of celebration mishaps throughout the world of sport, with some potentially expensive fails making the list. 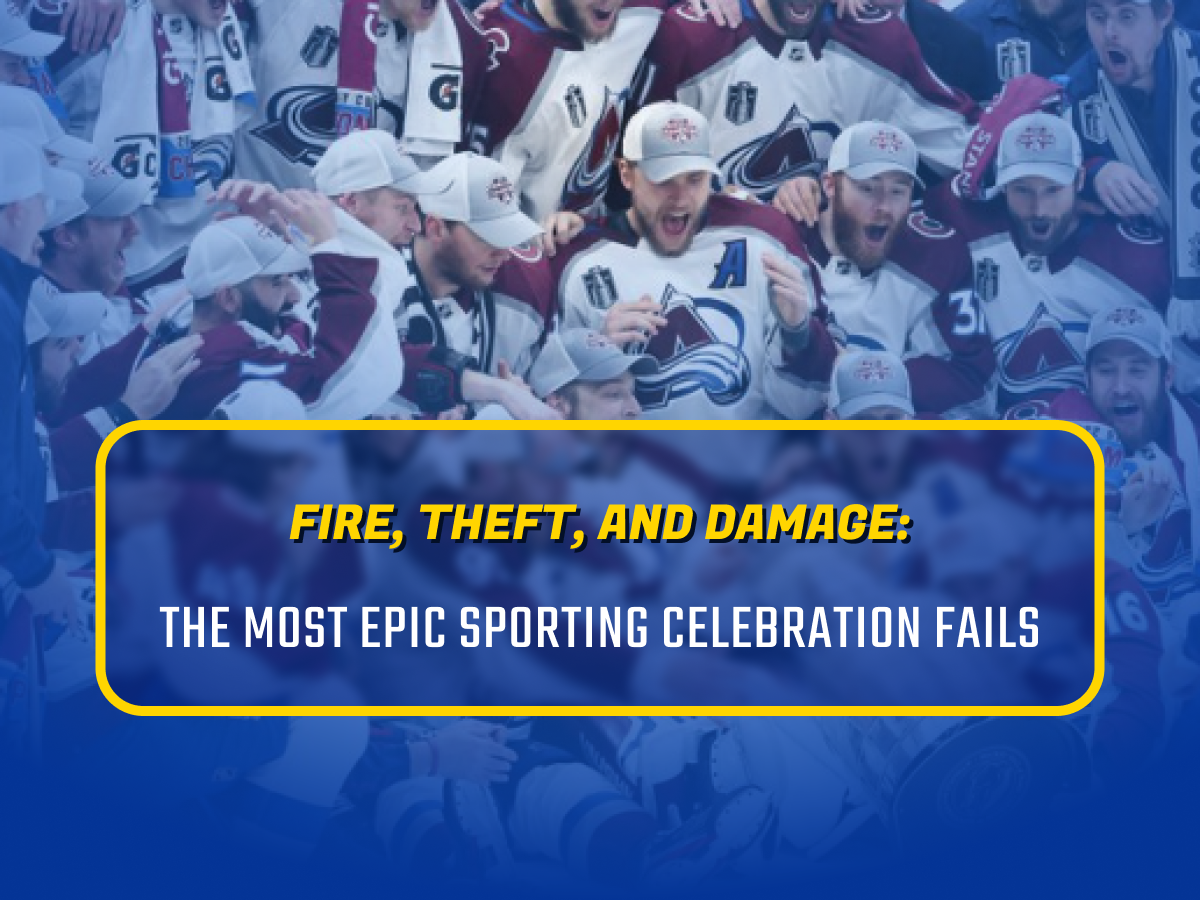 While we can all agree that 2020 was a crazy year, for Arsenal fans it is memorable for an additional reason. The team went on to win one of English soccer’s most prestigious trophies, but unluckily supporters could not be there to witness the lifting of the trophy due to the restrictions. But for Captain Pierre-Emerick Aubameyang, the trophy celebrations started with a slight mishap. When presenting The Cup to his teammates, it tumbled to the floor. Luckily for the striker it was a small drop with little damage as the FA Cup has been valued at over $1m!

Taking light of the incident, after winning the community shield soon after their FA Cup win, Aubameyang placed the shield safely on the bus and even strapped it in with the seat belt!

Musicians look away, unless you also enjoy breaking guitars. After winning at the Tennessee’s Nashville Speedway in 2009, Kyle Busch took inspiration from Music City and his trophy – a Les Paul Gibson guitar worth $25,000. After receiving the guitar on the podium, Busch made his way to a larger area and smashed against the floor, his first blow not being very successful. Perhaps it was a dream of the NASCAR driver to be a rock’n’roll star?

Note to Self: Ice is Slippery

The Colorado Avalanche were crowned victorious over the Tampa Bay Lightning in 2022, becoming Stanley Cup Champions for the first time in over 20 years. But celebrations started off slippery, as Nicolas Aube-Kubel tumbled with the cup in hand, letting one of North America’s oldest trophies tumble to the ice and leaving it with a dent. Oops.

When you see it… 🙈🙊 #StanleyCup pic.twitter.com/93EigCbAWC

2018 saw the Boston Red Sox win the World Series, and as the champions toured the city with the Commissioner’s trophy, it didn’t end too well for the flagged piece. A fan threw a beer onto the open top bus, which collided with the $19,000 trophy breaking it. Luckily for the Red Sox, a new trophy is given every year and they didn’t damage an old historic trophy… Here’s looking at you Colorado…

Dutch soccer team Ajax were celebrating their 2011 Eredivisie win through the streets whilst players peaked through the roof of a coach waving their trophy. Usually a safe pair of hands, goalkeeper Maarten Stekelenburg fumbled with the Dutch-league Eredivisie plate, seeing it tumble to the floor and roll comically through the street. Thanks to one of the fans celebrating, who promptly returned it to the team.

Brazil’s 2009 Campeonato Paulista champions Corinthians might have been fire on the pitch, but after, their celebrations were literally set alight. An unfortunate mix of paper streamers and pyrotechnics saw the Campeonato Paulista catch fire whilst on a small platform with some team members. Fortunately, no one was injured by the incident.

2011 was the year of dropping trophies from buses. Prior to Steklenberg’s fumble, Sergio Ramos dropped the Copa del Rey from the front of the bus during celebrations with his Real Madrid team mates. To make matters worse, the cup was ran over and crushed by the bus, a different type of red for Ramos this time, red from embarrassment.

In 1966 the FIFA World Cup Trophy was stolen while on display at Westminster Central Hall prior to the tournament, only to be found by a dog named Pickles.

When You Have One Too Many

A near miss recently happened for Golden State Warrior Klay Thompson, who while out celebrating their 2022 championship, dropped his NBA Championship ring. Luckily, it wasn’t lost to the crowd of fans, and in all fairness, Thompson does have three more in his collection.

Capt. Klay Thompson appears to drop one of his FOUR championship rings while celebrating with friends. Some fans thought he was joking. Gave it a kiss before he moved on. #WarriorsParade @sfchronicle pic.twitter.com/PQUGcZgM7m

When It All Goes Ships Up

It was a heart-in-mouth moment watching Tom Brady throw the Lombardi Trophy over the bay to another boat whilst celebrating the Tampa Bay Buccaneers Super Bowl success in 2021. Another perfect throw from the Quarterback, as the prestigious trophy landed safely in another’s hands rather than the water.

Although, the same can’t be said for the Six Nations Trophy. The 2022 winners France, reported that whilst celebrating on the Seine in Paris, the trophy was dropped into the river and lost. But “Les Bleus” team manager Raphaël Ibañez then reported the trophy was safe. It seems we will never know if the trophy actually took a dip or not.

Finally, heartbreak for MotoGP rider Aleix Espargaro at the Catalunya GP in 2022. The rider, who was poised for a podium position, thought the race had ended and began to celebrate, but the checkered flag was still a lap away, leaving the Spaniard to finish fifth at his home grand prix.