Home > About us > Blog > How Do Sports Fans Feel About NFTs?

How Do Sports Fans Feel About Nfts?

More Than 1 in 5 Sports Fans Invested in NFTs

Unless you’ve been living under a rock, the odds are you’re at least somewhat familiar with NFTs, or non-fungible tokens. In a whirlwind of crypto-fueled hype, NFTs became one of the most popular trending topics of 2021, often associated with massive price tags. Earlier this year, an Andy Warhol NFT, reworked from a 1980’s original, sold for $870,000 at auction. If that somehow seems egregious, it’s almost nothing compared to the Mike Winkelmann (known online as Beeple) NFT that sold for more than $69 million at auction.

Not without controversy, NFTs were virtually everywhere for a few months. The Academy Awards gave out an NFT image of the late Chadwick Boseman to guests in gift bags, an NFT of the 2007 viral video “Charlie Bit My Finger” sold for more than $760,000, and the NFT impact on the sports world is no different. “Digital” forms of sports memorabilia are selling for hundreds of thousands of dollars, sometimes capturing only seconds of a moment or highlight from players or games.

So how much do sports fans know about digital memorabilia and NFTs, and how excited by them are they? To find out, BonusFinder.com surveyed over 1,000 sports fans to get their input on the newest trend in art and collectibles. Read on as we explore how many sports fans have a firm grasp on NFTs, how many have already invested in them, and how many see the hype as a bubble waiting to burst.

These maps show where online searches for NFTs, NBA Top Shot, and sports cards are the most popular around the U.S. Across the country, NFTs are garnering the highest search traffic in California, Hawaii, District of Columbia, Nevada, and Vermont. In an art world that’s often accused of being static and unchanging, NFTs and digital representations of art have the potential to be game changers in the California art scene if more artists decide to get on board. 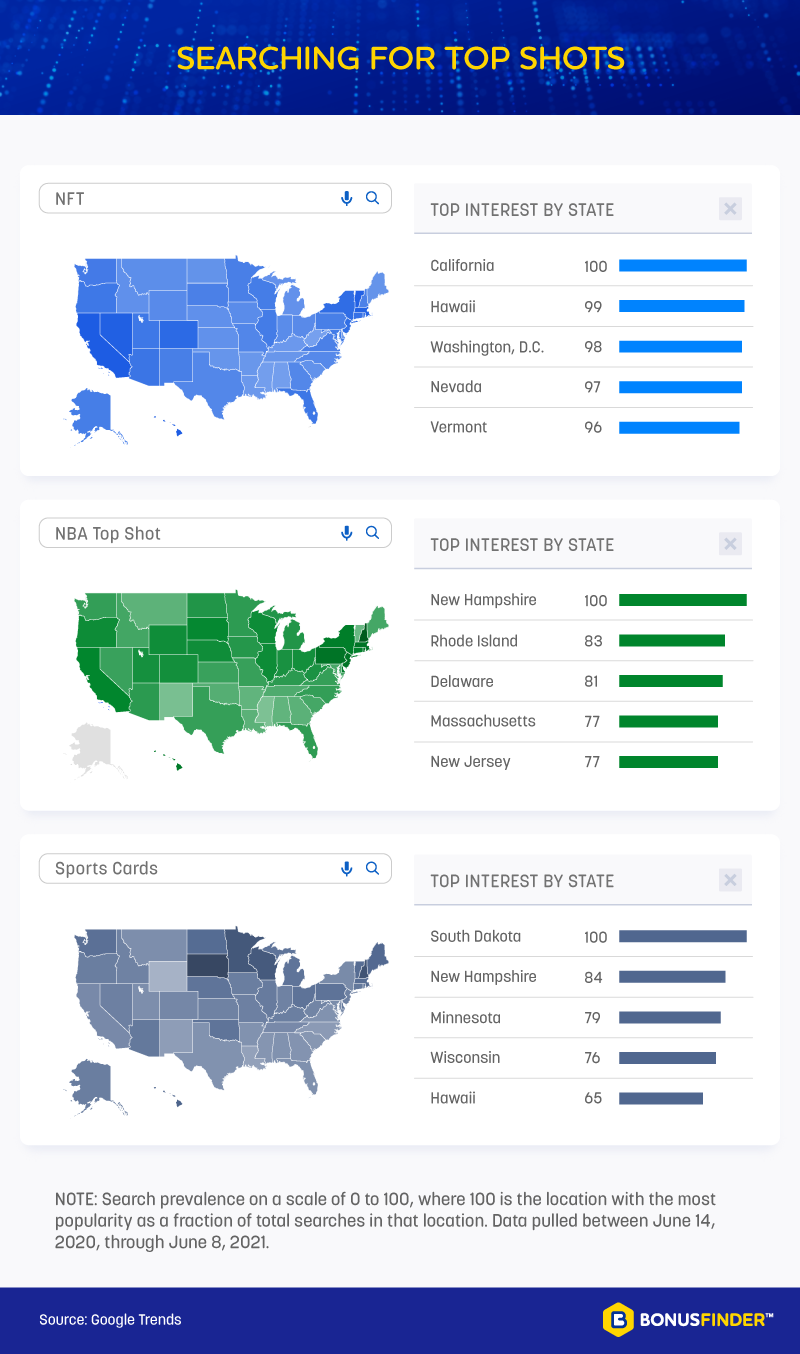 NBA Top Shot searches were most popular in New Hampshire, Rhode Island, Delaware, Massachusetts, and New Jersey. Officially backed by the NBA, NBA Top Shot allows fans to purchase digital basketball highlights (often referred to as “moments”) with real money to collect and display them to other fans. Some moments are more rare than others, with one-of-a-kind moments available for auction. Top Shot has become so popular in 2021 that more than 50,000 users have already bought in as of May, spending more than $65 million combined.

Sports on the Blockchain

NFTs are digital representations of art, or assets, that exist on the blockchain, like cryptocurrency, and are often encoded with the same software. They’ve existed since 2014, but only recently, in the early months of 2021, exploded onto the art scene. Anyone can view an NFT for free, but built-in authentication means only a set number of people can own them. Being “non-fungible” means no two NFTs will have the exact same valuation, compared to the value of two bitcoins or some other form of cryptocurrency.

How Many Sports Fans Are Betting on NFTs?

For some people, NFTs and sports NFTs aren’t just about collecting, they’re about investing. Establishing a baseline for valuation on digital art can be complicated, but as the last year has shown, some NFTs have sold for millions of dollars. As an investment opportunity, the future value of NFTs is largely contingent on how much money people are willing to spend to own these virtual moments.

Among those surveyed, more than 1 in 5 sports fans reported having invested in sports NFTs, spending an average of nearly $600 in 2021. Among those planning to spend more, fans anticipated putting another $661, on average, toward the cost of additional sports NFTs. The most popular investment avenues included NBA Top Shot (52%), digital trading cards (47%), and MLB Champions NFTs (43%). While not officially licensed by the NFL, 19% of sports fans who invested in sports NFTs reported owning a piece of the Rob Gronkowski Championship Series NFTs.

Fans of the Chicago Bulls (27%), Boston Celtics (25%), New York Nicks (24%), and Cleveland Cavaliers (18%) were the most likely to purchase NFTs, and inspiration for investing most commonly came from friends (52%), family members (40%), and news articles (38%). Twitter (23%) was the most popular sports NFT social media inspiration, and Tesla founder Elon Musk (12%) was the top influencer.

For those excited about the investment potential of sports NFTs, the most popular reasons to invest were because fans considered NFTs the currency of the future (36%), wanting to diversify their portfolios (34%), and the possibility of a massive return-on-investment (33%). Sports NFT investors were generally seen as risk-taking (72%) and forward-thinking (34%), though they were also pegged as reckless as well (34%). 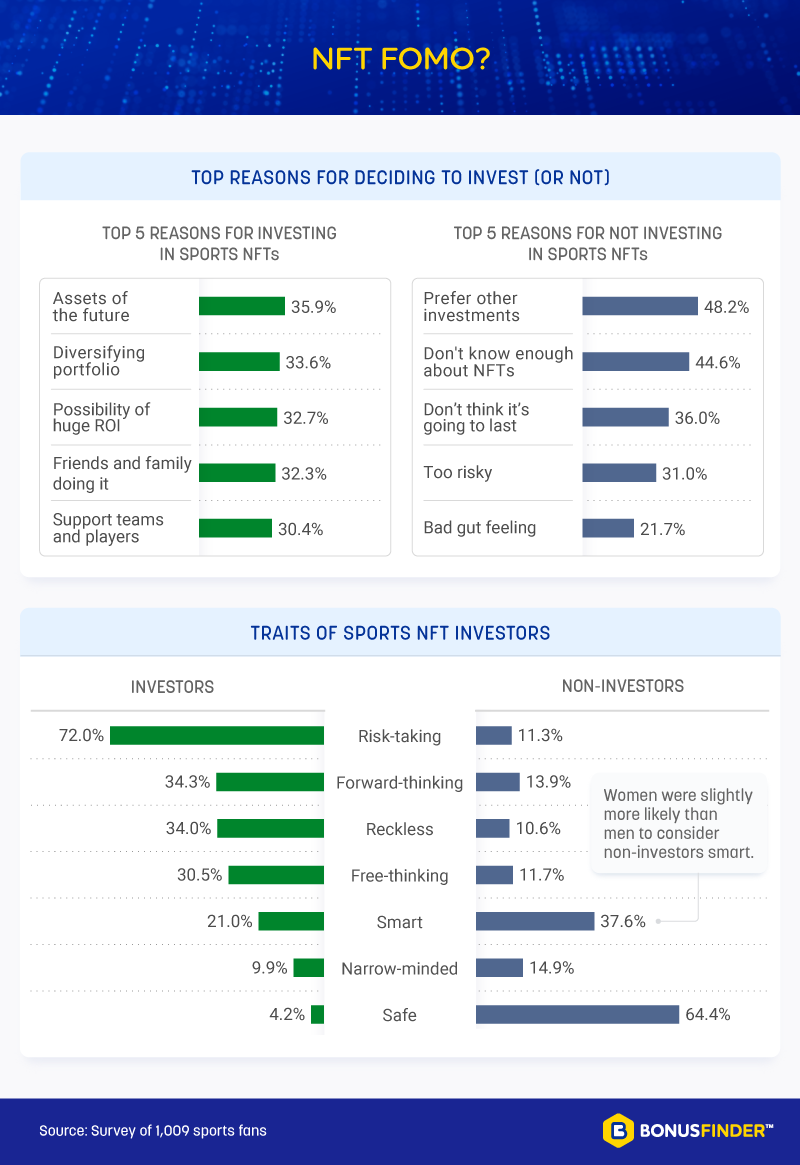 Among sports fans opting to steer clear of NFTs, 48% said they would rather invest in something else, 45% said they didn’t know enough about it, and 36% said it wasn’t going to last. While 64% of sports fans said those who stay away from sports NFTs are playing it safe, another 38% stated non-investors were smart. In contrast, just 21% of fans labeled people investing in sports NFTs as smart.

The NBA has found a way to capitalize on the sports NFT craze, but not all sports leagues have been as quick to find an officially licensed NFT solution to meet demand. While reports have surfaced that the NFL is working on its own in-house NFT strategy, 46% of sports fans said they would purchase NFTs from the NFL if they were released. Similarly, fans reported wanting MLB (32%), NHL (14%), and NASCAR (12%) NFTs. A majority of fans, 57%, said they would buy a sports NFT from their favorite teams, and another 42% were confident their teams will eventually offer them. 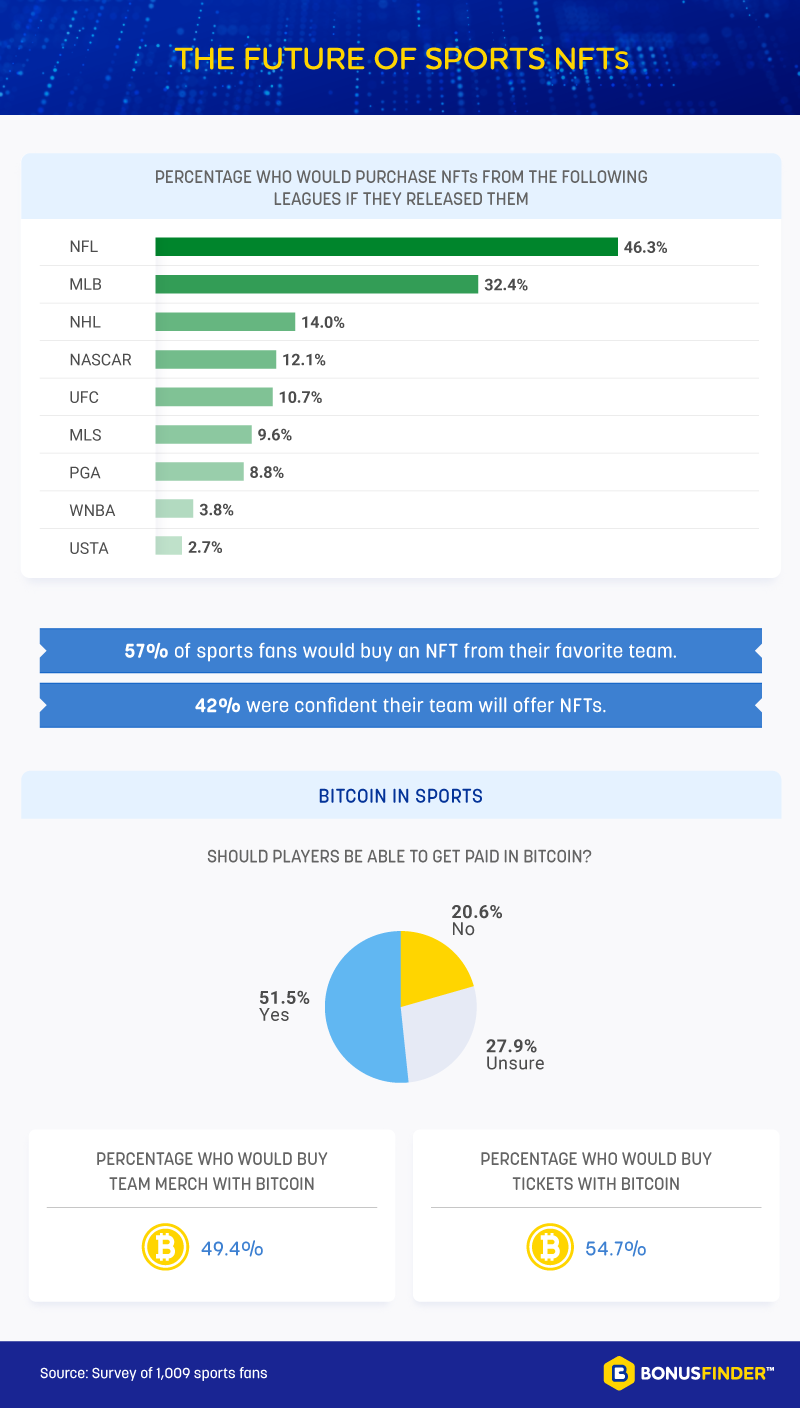 There’s no telling how long the NFT craze will last. While it may seem unlikely to some that NFTs will have long-term investment potential, it may also have seemed unlikely that any one single NFT could be worth $69 million. Among sports fans, many are familiar with the concept (even if they couldn’t all confidently explain it to someone else), but some remained skeptical whether sports NFTs are worth spending money on.

At BonusFinder US, we take all the uncertainty and guesswork out of betting on the future. As the No. 1 site for legal gambling in the U.S., we explore all of the legal online betting sites and casinos across the country and make sure you get all the best bonuses and sign-up offers. With expert reviews and the biggest deposit bonuses and free money, we only recommend the best in online legal gambling sites. Ready to start playing? Visit us online at BonusFinder.com to get your bonuses today!

We studied the intersection between sports fans and NFTs by administering online surveys to 1,009 sports fans. Among the 1,009 fans surveyed, 35.7% identified as women, 64.1% identified as men, and less than 1% identified as nonbinary. Respondents ranged in age from 18 to 83 with an average of 38. An attention-check question was used to identify and disqualify respondents who failed to read answer options in their entirety. Outliers were identified and removed where necessary, specifically where amounts spent on NFTs were questioned.

The main limitation of this study is the reliance on self-report, which faces issues such as attribution, exaggeration, telescoping, recency bias.

Are you readers interested in learning more about these novel digital assets? Feel free to share our study for any noncommercial purposes, however, please link back to this page so the creators can receive the credit they deserve. Thanks!