Mega Moolah is a worldwide smash hit online slot machine that’s made dozens of millionaire among the years all around the world. Unfortunately for us in the States, Mega Moolah is a Microgaming slot and thus isn’t available in the US.

We’ll keep and eye on the situation, but meanwhile if you’re into playing real money jackpot slots, please see our PartyCasino review and there you can find great jackpot slots like Melon Madness Deluxe. 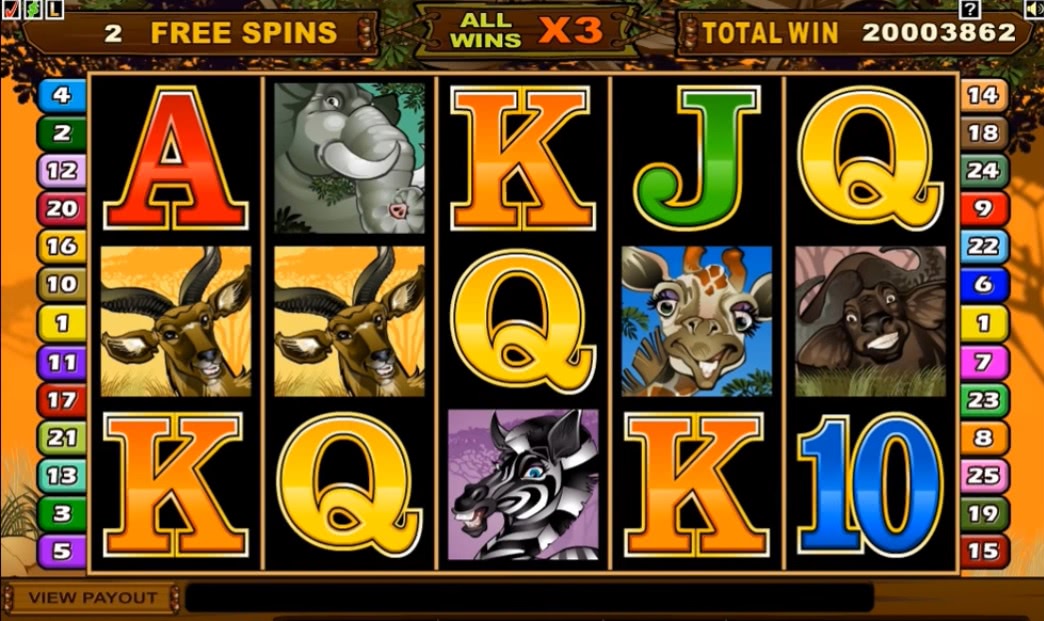 Mega Moolah is famous for raining down millions of dollars upon unsuspecting slot players.

What if you went from taking spins on a quarter slot to being ten million dollars richer in minutes? That’s the promise of Mega Moolah, the internet’s most popular progressive slot machine. Created in 2006 by Microgaming, its mega jackpot has been awarded to casino players nearly 50 times since its founding.

The most recent winner was a Canadian – in March 2019, as she walked away from her computer $20 million richer. Want to do the same? Below, we’ll talk about where you’ll find Mega Moolah and strategy that will get you closer to hitting paydirt.

Mega Moolah is one of Microgaming’s most successful slot games. For American gamers, that’s a problem – as of January 2023, Microgaming has yet to be licensed by a gaming authority and American players are unable to play the game.

However, once they get approved, sites like Unibet will likely add Mega Moolah, as their global site offers it. When this happens, we’ll let you know.

With millions of dollars up for grabs, American gamers will take to this slot like a fish to water. Let’s explore Mega Moolah in further detail below.

If you want to hit it big playing Mega Moolah slot, sizable bankroll will be a plus. Fortunately, online casinos for Americans offer generous bonuses that will give you plenty of capital to start with. There are two types of welcome promotions that sites use to entice players – deposit bonuses and free spins.

Online gaming is an extremely competitive industry. Even established players are in danger of having their market share taken by exciting upstarts. This possibility motivates sites like PartyCasino to offer to match deposits up to a cap (like $500).

However, there is a catch – to unlock bonus funds, they must be bet through a number of times. Called a wagering requirement, it is designed to protect online casinos from hit and runners. To withdraw a bonus, players must wager through it an average of 30 times.

This shouldn’t worry you too much, though – it’s easy to bet through many hundreds of dollars in a session. With any luck, you’ll be able to keep most of your bonus money after satisfying its wagering requirements. Which bonuses are best? Check our updated list at the top of the page for the most lucrative ones.

Free spins are an attractive welcome bonus, as they give players a chance to win at no cost. Should you hit a huge combo, the potential is there for huge wins. However, like deposit bonuses, most sites impose wagering requirements. This obligation means you must bet any winnings multiple times (usually 30-50x) to withdraw them.

Sadly, no providers award free spins on Mega Moolah. As such, you’re better off going with a casino offering a fat deposit bonus and low wagering requirements.

How does it pay out? 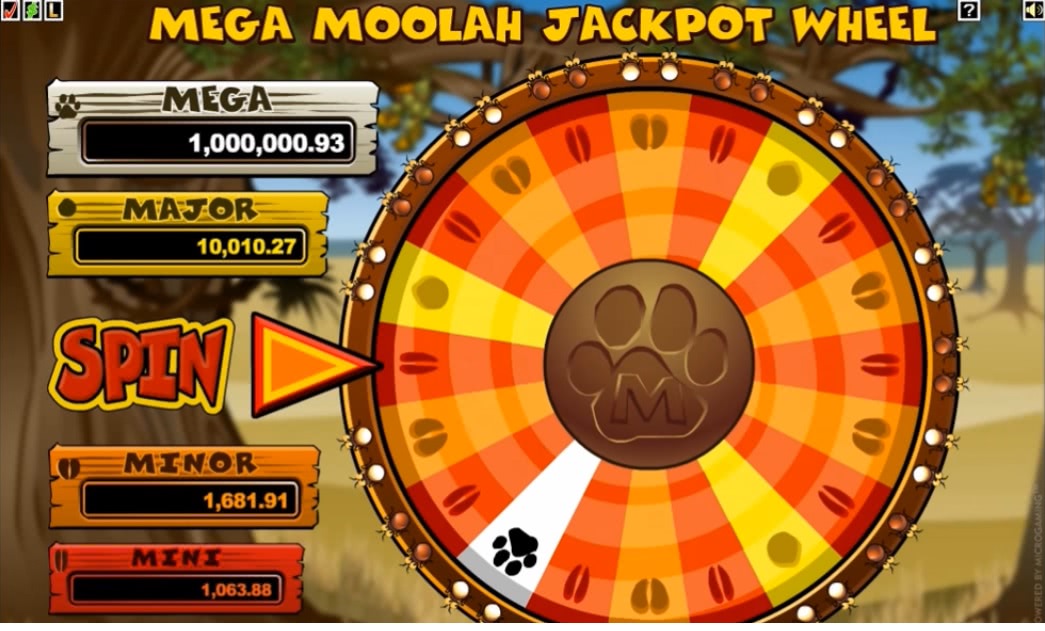 Mega Moolah pays out really well when you take the jackpot round into consideration.

Mega Moolah gets a ton of attention for its massive jackpots, and rightfully so. However, you’ll have to put in your spins before getting a chance to spin the jackpot wheel. Let’s start by listing off some basic stats about Mega Moolah slot:

Like other progressive casino games, its return to player percentage is lower than conventional slots. This means it is a higher variance slot, even when you leave the jackpots out of the equation.

Combined with its higher than average hit frequency, win streaks for this popular slot can get very lucrative. However, this also means that losing streaks can be more pronounced compared to other games. These downturns are made tolerable by the jackpot spin rounds – even if you hit the mini jackpot, a windfall of $10 to $30 or more can save a session.

When you get five Mega Moolah symbols on a pay line, they pay out as follows:

Two things to note here: first, try to get lions. They award 125 coins for three lions, 1,500 coins for four, and as shown above, 15,000 coins for five. Secondly, monkeys are scatter symbols – they can appear anywhere on the reels, and they’ll count as a combo. Hitting three will send you to Mega Moolah’s free spin round, where winning combos are tripled.

Mega Moolah is best known for its life-changing jackpots. Naturally, its mega jackpot gets the lion’s share of the attention, as it awards seven-figure (and occasionally eight-figure) prizes. However, this game has three other pots: the major, minor, and mini.

The mini jackpot awards a minimum of $10 to players. It might not be enough to buy dinner, but it could save your session if you’re down. The minor jackpot guarantees a min payout of $100 – more than enough for a fun night out with friends. The major jackpot starts at $10,000 – enough to pay off bills or go on a luxurious vacation.

It is the mega jackpot that everyone dreams about, though. Starting at $1,000,000, it has historically paid out an average of $5.7 million to winners, once every nine weeks. However, months occasionally pass between winners – this allows the jackpot fund to climb above $10,000,000.

The odds of winning the mega jackpot may be small, but someone’s gotta win it. It may as well be you!

Unlike Mega Moolah’s free spins, the jackpot spin round is randomly triggered. Its algorithm is secret, but it is thought the more you bet, the better your chance of getting a jackpot spin. Once you get through, you’ll see a wheel with 20 segments – 10 for the mini, 6 for the minor, 3 for the major, and 1 for the mega.

Realize the odds are NOT proportional to the segments on the wheel. That is, you don’t have a 5% chance of hitting the mega or a 15% chance of getting the major. The exact probabilities are also a secret, so if you hit anything other than the mini, consider yourself lucky.

There’s more to Mega Moolah than just its jackpot – it also has features like wilds and free spin rounds. Lions are wild in this game – they can substitute for any symbol to create the biggest possible win. Not only that, but the presence of a lion wild DOUBLES the normal coin win for a combo. Wins get crazy when you get three or more lions – three pay out 125 coins, four give 1,500 coins, and five grant a colossal 15,000 coins!

As mentioned earlier, monkeys are the scatter symbol in Mega Moolah. Getting three or more anywhere on the reels will send you to the free spin round. In it, you’ll get 15 chances to win big – every combo is worth TRIPLE its normal value. 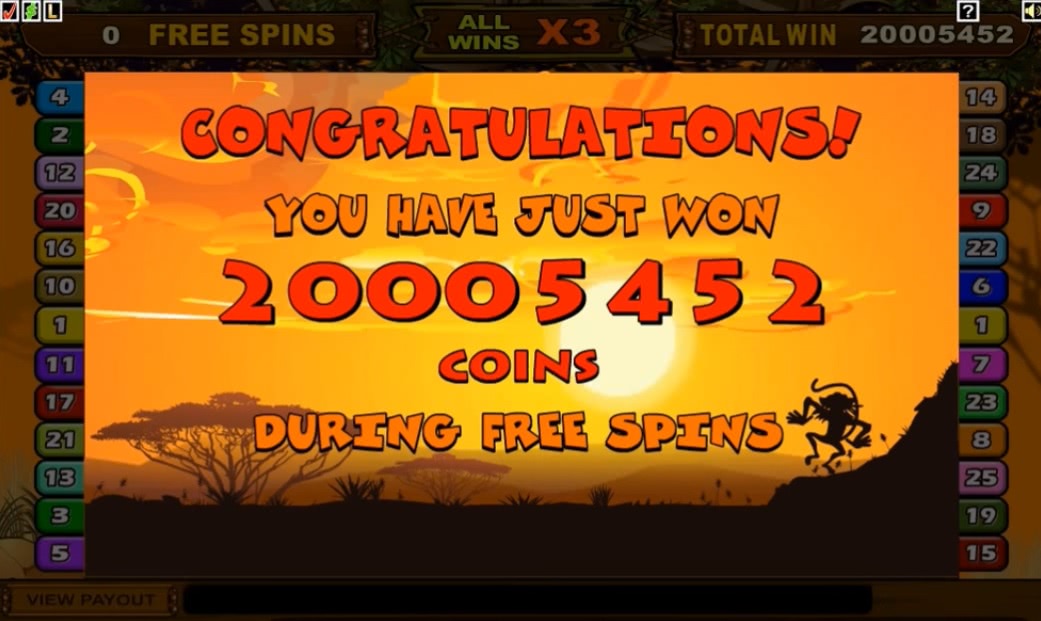 Gameplay in Mega Moolah is straightforward – set your bet, spin the reels, and hope for the best. However, there are a couple of ways you can increase your odds of winning big.

First, realize that the bulk of long-term winnings comes from triggering the jackpot spin round. Even if you win the mini or minor most of the time, it dwarfs wins in the base game. The algorithm awards jackpot spins to players who bet more – therefore, try to bet more than the minimum.

However, don’t play bigger than your bankroll can withstand. While it’s more likely you’ll trigger a jackpot spin by betting more, it won’t matter if you go broke. Betting smaller will get you fewer jackpot spins, but you’ll still have a chance to win. Mega Moolah winner Jon Heywood won £13 million ($16.7 million) playing for £0.25 (minimum spin in the UK). If he did it, so can you.

Want to play Mega Moolah on your tablet or smartphone? Nothing spices up a commute or a boring Sunday like playing for life-changing money. Don’t look for a Mega Moolah app in the App Store, though – instead, find an online casino that offers it.

Some sites, like PartyCasino, have their own app. Other online casinos have mobile-optimized sites that work just as well. Whether you are on a train or the beach, you can play Mega Moolah wherever you are.

With dozens of winners and hundreds of millions of dollars paid out, Mega Moolah is for real. No other progressive jackpot slot comes close to its average payout of $5.7 million. As such, those looking for a life-altering win needn’t look anywhere else for gaming excitement. The odds of winning the mega jackpot from casino games may be long, but they aren’t zero.

Once Mega Moolah makes its virtual landfall in the US soil, BonusFinder.com’s readers are the first ones to know. Online jackpot slots don’t get any bigger than this!

Where can I play Mega Moolah Online?

You can't currently play Mega Moolah if you are located in the United States, as Microgaming has yet to obtain it's US license. However, in the meanwhile, we suggest that you check out NetEnt games, such as Starburst or Gonzos Quest.

Can I play Mega Moolah in the US?

No. Microgaming does not have an US license yet, so any casino site offering Mega Moolah is an illegal offshore operator. You should never trust these operators, as they are not governed by any US laws. If they refuse your withdrawal, there is nothing that you can do.

What are the best Mega Moolah tips?

Just like most casino games, the odds that you win in the long-term are quite slim as Mega Moolah's RTP (Return-to-Player) is around 95%. However, you could make big time money if you hit the jackpot. Jackpot rounds are more likely to happen if you bet big. Therefore, you should probably bet as high as your bankroll allows. Just don't exceed it, because you can't win if you can't spin.

2.3 Sweepstake Coins Get this bonus now just sign up