Get the current moneyline odds for the next Flyers game as soon as they’re posted on BetMGM Sportsbook PA. 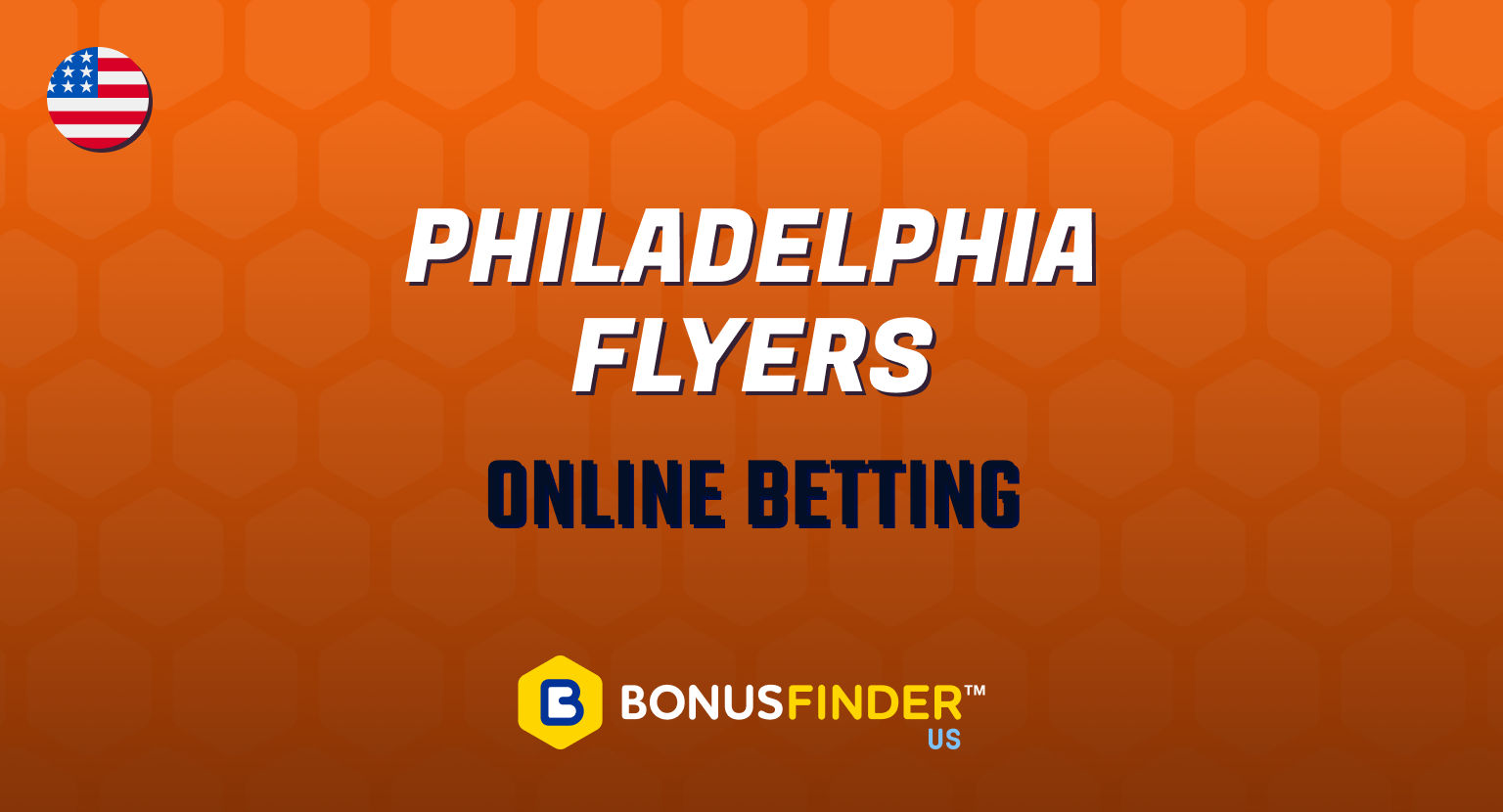 Check out the best Philadelphia Flyers betting odds from BonusFinder US.

The Philadelphia Flyers were squarely in the underdog group at the start of the 2022-2023 National Hockey League season, but have played well thus far. With a terrible performance last season that left them dead last in the Metropolitan Division, the Flyers are looking to improve their chaotic gameplay this season. Oddsmakers are still not too optimistic, as the Flyers are at the bottom of the pack for NHL futures.

You can check the odds for the Flyers’ next game below.

Since Flyers didn’t even make the Stanley Cup playoffs last season and their roster is mostly unchanged, the Philadelphia Flyers are the bottom of the pack when it comes to the Stanley Cup odds. While there is variance in the odds PA sportsbooks offer at the moment, Flyers are not expected to be in the hunt for the Cup; currently Stanley Cup champions the Colorado Avalanche have the best odds to top the League this season.

The Eastern Conference is arguably the tougher Conference in the NHL, and the Flyers are not expected to win this one either. Flyers placed 8th (aka last) in the Metropolitan Division last year, and it is extremely unlikely that they could top it this season. 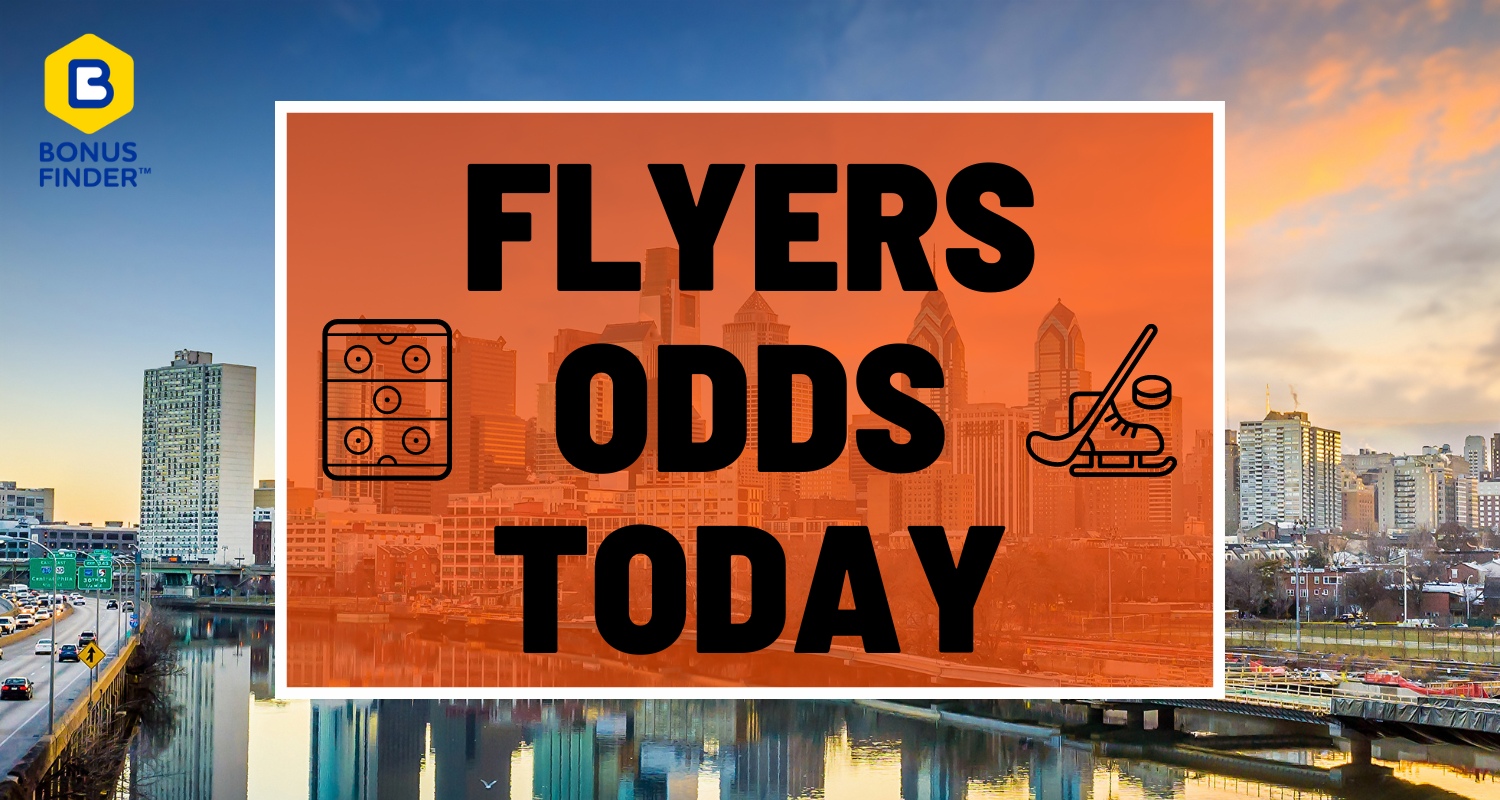 The Flyers start their season in October against the New Jersey Devils; get the best odds for every game right here.

Philly hasn’t been very active on the player market since they are struggling with cap space. In addition to getting a new head coach, the Flyers have added a few depth players while figuring out what to do with their existing roster since Brink’s surgery will keep him out for a long time. 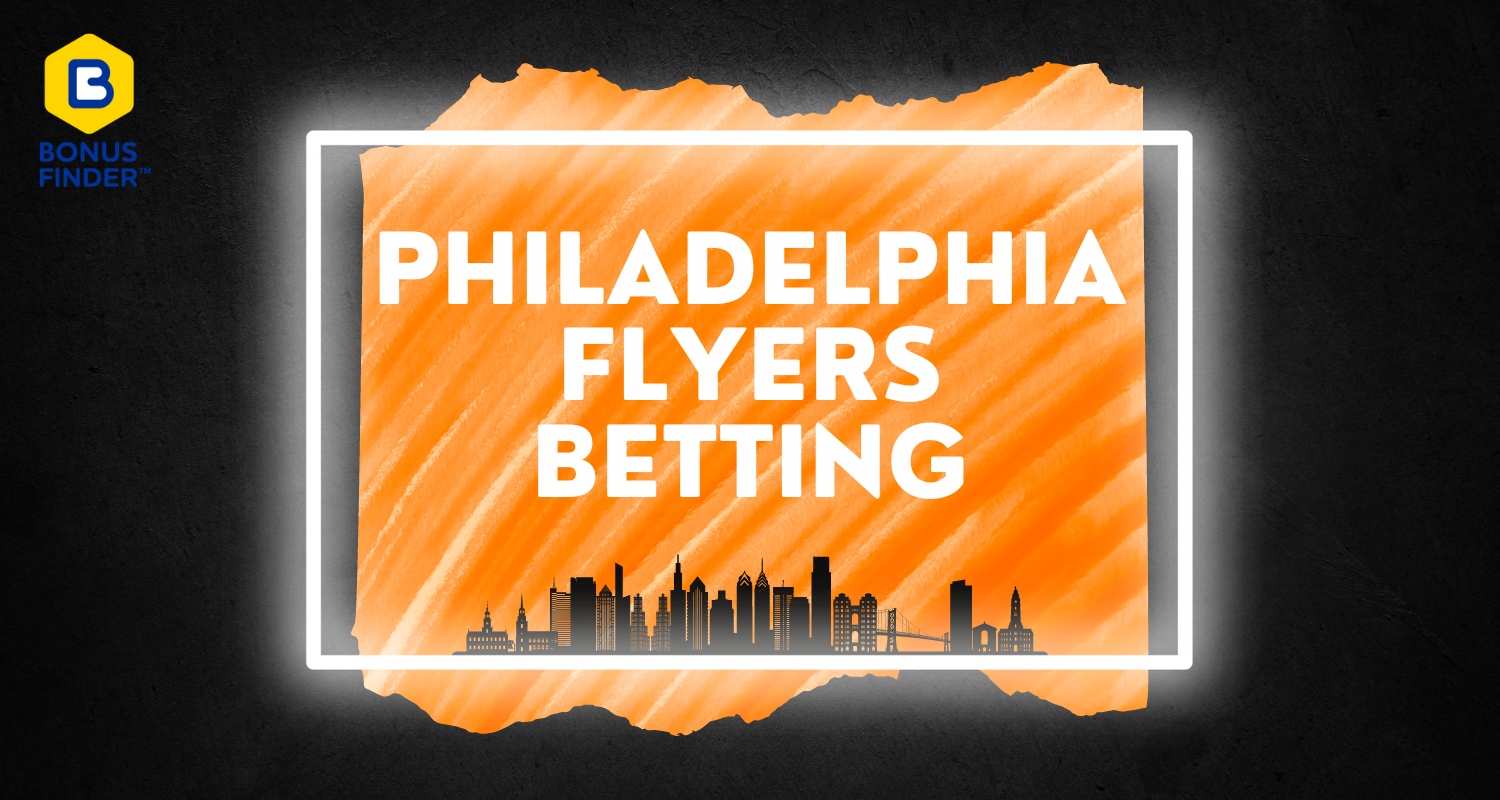 The Philadelphia Flyers have a busy schedule as the NHL is slated to finally return to normal programming.

🏒 Betting on the Flyers

Betting on the Flyers is easy on your phone or laptop and every single Pennsylvania online sportsbook offers lines and odds on all Flyers’ games. You can already place futures bets on the Flyers’ full-season prowess, and the game lines will be released soon on sports betting sites. Let’s check out what hockey betting options you have.

Moneyline bets are bets on the winner of the game. For example, if you bet on the Flyers with odds -120, you expect them to win. Odds with minus sign indicate the favorite, while odds with a plus sign signal the underdog. Moneyline is probably the most popular hockey bet since the margins between any two teams are quite small due to the nature of the sport.

Point spread is also called puck line in hockey, and the most common spread is 1.5. Point spread odds are intended to gather bets on both sides of the line, in order to make sure the sportsbook ends up with some profit. If the odds are Flyers +1.5 -110 and Penguins -1.5 -110, the Flyers are the underdogs and the Penguins the favorites, just like on moneyline bets. The difference here is that the Penguins must win the game by 2 goals or more for that spread bet to win. On the other hand, the Flyers have to stay within one goal or win the game outright for the Flyers bettors to win. Many sportsbooks have alternate spreads with different odds for expert bettors to take advantage of.

A total bet means betting over or under a predetermined number of goals in a game. This means total goals, including both teams’ scoring, but you don’t need to know the exact end result. If the lines read O/U 4.5, you can bet whether the game has 5 or more goals or 4 or less. If the result is 3-4, the over bettors win. Keep in mind that a few empty-netters or stellar goaltending can ruin your total bet, so exercise caution when making these wagers.

Prop bets come in two forms: player props and team props. You can also place game props like the exact end result. Player props include options like first player to score, number of points for Cam Atkinson, and number of penalty minutes for Rasmus Ristolainen. Team proposition bet examples are team to lead at first intermission and number of goals for Flyers. In-game props can include betting whether the Flyers score on their powerplay or who wins the face off.

Parlays combine several bets into one and they all have to be correct for the parlay to win. Recently, one game parlays have become very popular and you can easily create these for any Flyers game. You can place a moneyline, spread, and a prop bet from the same game into one parlay and see if you win. Alternatively, you can do a traditional parlay and bet that Flyers, Rangers, and Panthers all cover the spread.

Futures bets are bets on the winners of the Divisions, Conferences, and the Stanley Cup. In addition, you can bet on the Hart Trophy and Conn Smythe Trophy winners. Some books also let you bet on other award recipients. Odds update as the season progresses and we get more insight into different players and teams, so make sure to place your bet when you feel confident and the odds are in your favor. 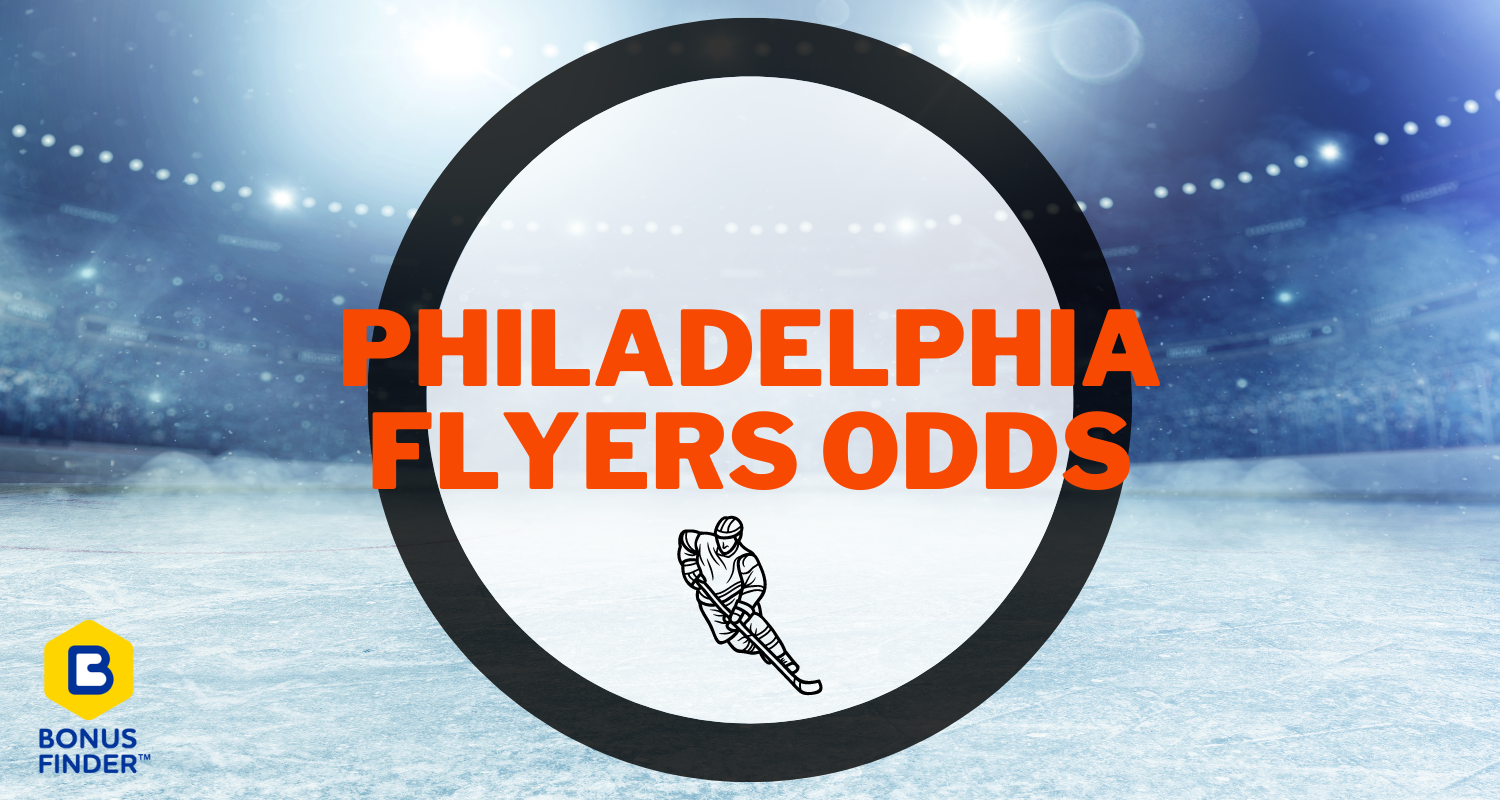 You can place straight bets, parlays, props, and futures on the Flyers.

Hockey bettors can get a ton of first time bonuses and promotions from the PA sportsbooks. Each of the PA sportsbook bonuses can be cashed just once, but the ongoing promotions are available weekly or daily. BetRivers is the official sports betting partner of the Philadelphia Flyers, so you can expect to see several good deals on their site. Below are the current welcome bonuses you can get from PA sports betting sites that follow responsible gaming regulations.

Last season was another rough one for the Philadelphia Flyers, but GM Chuck Fletcher hasn’t blown up the roster. Instead, he signed the controversial defenseman Tony DeAngelo to a two-year contract and brought back Justin Braun on a one-year deal. The Flyers are still in desperate need of reinforcements but are hitting the salary cap ceiling already.

Tortorella will be taking over the head coaching duties from Mike Yeo, who was the interim HC after the Flyers fired Alain Vigneault in December 2021. Torts was previously the head coach of the Columbus Blue Jackets, who announced he would not return at the end of the 2020-2021 season. Tortorella won the Stanley Cup in 2004 with the Tampa Bay Lightning and has won the Jack Adams Award twice in his coaching career.

Darryl Williams and Kim Dillabaugh got to stay after the coaching revamp, and the Flyers added Brad Shaw to take over the defense and penalty kill teams. Rocky Thompson rounds up the coaching staff.

The Philadelphia Flyers have a good pool of prospects, but they haven’t always been able to develop them into NHL stars. Currently, Cam York and Morgan Frost are taking their first steps with the Flyers and the team is looking to develop into more fullrounded players this season. Wade Allison and Noah Cates are good players but might not fit into Tortorella’s plans. Ivan Fedotov is a case of its own, as the goaltender was on his way to Philly but was sent to the Russian military service instead. When he will be able to showcase his talents in the City of Brotherly Love remains an unanswered question. Other prospects are not looking to break into the regular line-up this season, but we will wait and see what happens during the training camp.

1️⃣ Who is the Flyers' head coach?

The Flyers are coached by John Tortorella, who was selected as the new head coach in June 2022.

2️⃣ When is the next Battle of Pennsylvania?

The Philadelphia Flyers will be taking on the Pittsburgh Penguins on Friday the 25th of November. The Thanksgiving Showdown is scheduled to start at 5 PM at the Wells Fargo Center.

3️⃣ What are the Flyers odds to win the Stanley Cup?

Not good. Currently hockey fans can get the longest odds from DraftKings at +20000, while BetRivers lists them at +8000. Regardless of the sportsbook, the Flyers are bringing up the rear with the likes of Arizona Coyotes, Montreal Canadiens, and San Jose Sharks; winning the 3rd Stanley Cup in the franchise history is beyond unlikely.