The Cleveland Browns are unlikely to make the playoffs after the NFL week 14. The Browns playoff chances are just 4.35% and they are third in the AFC North with a 5-8 record. If you still believe in Browns to make the playoffs, check out the best Ohio sports betting promos and place your bets on the Browns. 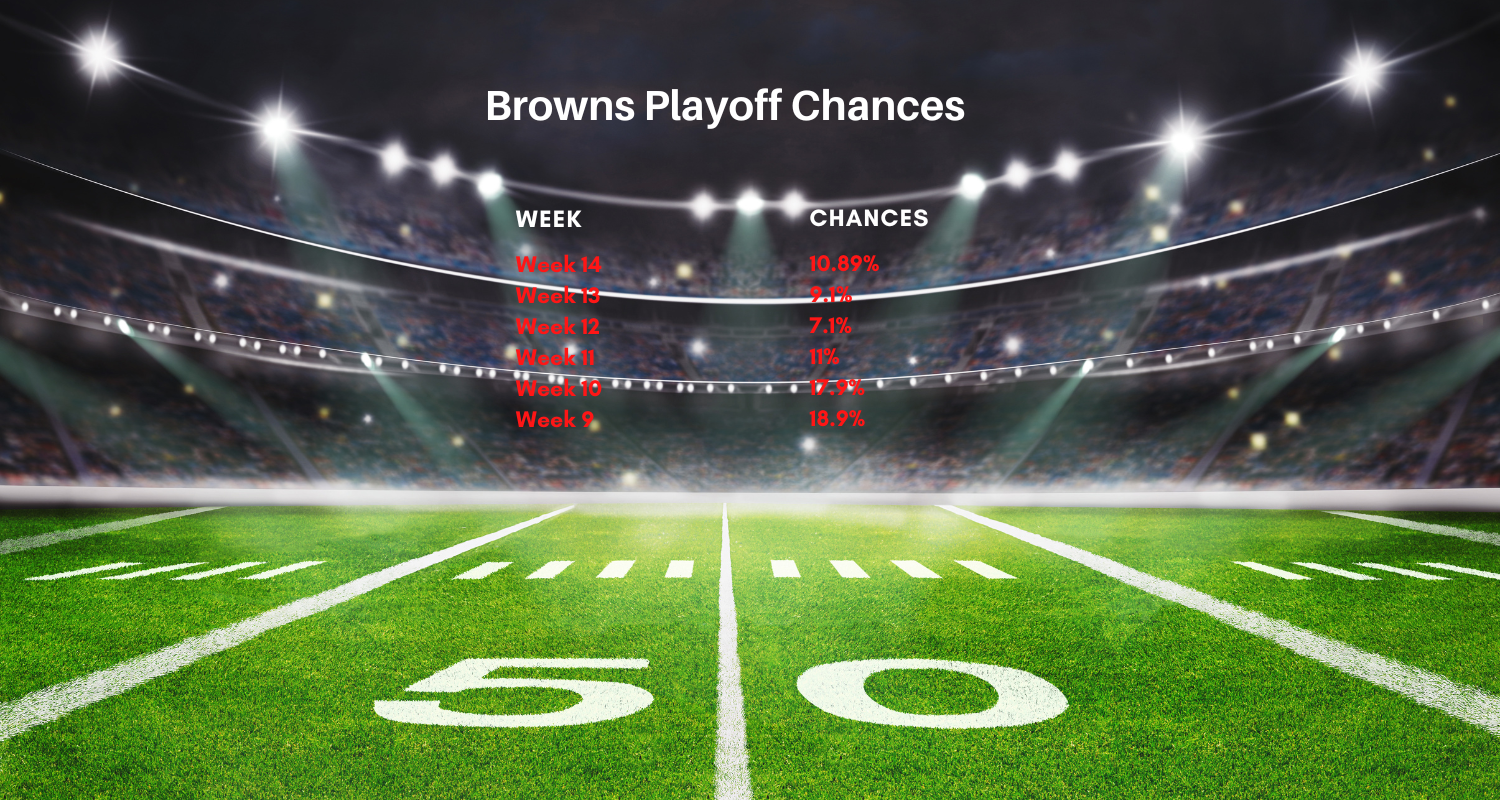 The browns odds of making the playoffs have fluctuated during the season.

After their devastating loss to Bengals in week 14 of the NFL, the Browns are now only 4.35% likely to make the NFL playoffs. Nothing short of a miracle can save the team at this point.

Ohio sports betting sites are now giving the Browns a 4.35% chance to make the playoffs. This 6% decrease to their playoff berth means that they are listed at +2200 odds, and can’t make the playoffs unless both Ravens and the Bengals completely drop the ball.

Week 15 NFL: Will The Browns Beat the Ravens

Cleveland’s next game will see them face the Ravens in a game where they are 2.5 point favorite. Even though the odds suggest a close matchup, it is quite unlikely that the Browns can turn it around at this point anymore.

The Cleveland Browns odds to make the playoffs are +800 heading into NFL Week 14. We’ll recap what has brought the Browns franchise to this position with the help of our NFL news correspondents & experts.

Can I bet on the Browns to Make the Playoffs in Ohio?

Ohio sports betting apps launch on January 1st, meaning that you can only bet on Cleveland Brown’s playoff chances after the New Year. However, you can already claim free money from several sportsbooks with their pre-registration offers.

The Cleveland Browns are +25000 underdogs to win the Super Bowl. This is among the worst odds in the league. Their odds have plummeted since the beginning of the season, which can be seen from the graphic below.

The Browns started the season as +300 underdogs, but have fallen far behind during their 7 out of 8 losing streak.

The Browns face one of the toughest schedules, which negatively impacts their playoff chances. However, if they can take several wins from their last five, they may still make the postseason. The games against the Bengals and Ravens play a large role, as they need both their AFC North rivals Ravens and the Bengals to lose as many games as possible.

Can Browns Get the Wild Card Spot?

It's unlikely. The AFC North is contested between three teams, and the Browns need to edge past the Bengals and the Ravens to make it to the postseason. They are also trailing the wild card spot by 3 wins.

Will the Browns Make the Playoffs?

It's highly unlikely. Their chances of making the playoffs are at 10.89% at the moment, which makes it quite unlikely that they will play playoff football.