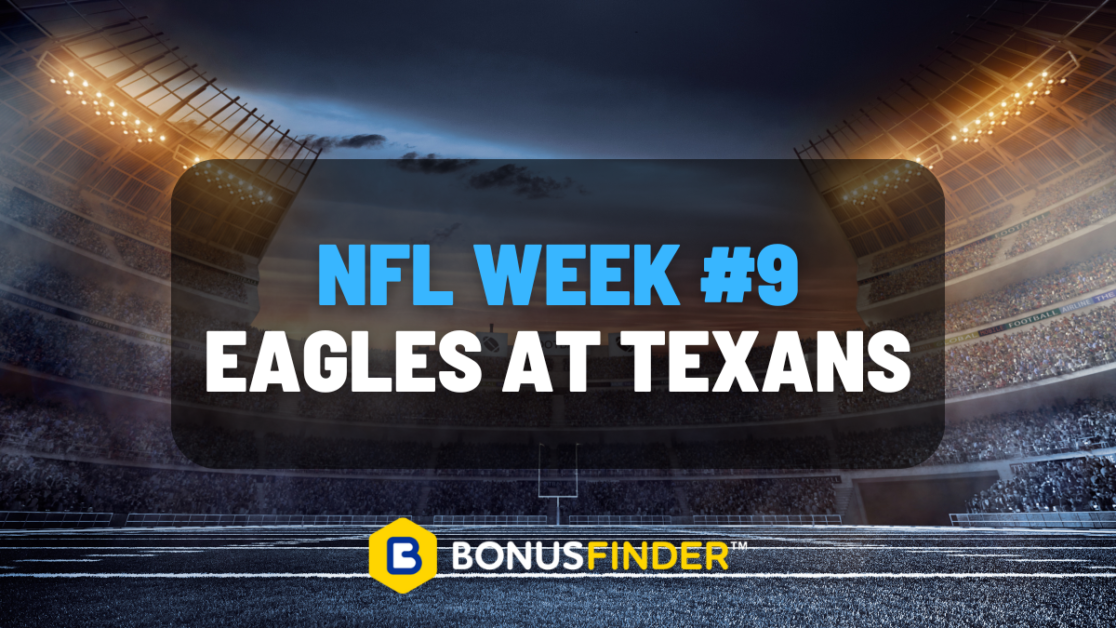 Week 9 of the NFL season kicks off Thursday night with a game involving the league’s lone undefeated team. Despite being on the road Thursday, the 7-0 Eagles are heavily favored against the 1-5-1 Texans. While Philadelphia sits atop the NFL standings, Houston’s second-to-last, checking in ahead of only 1-6 Detroit.

Leading American mobile sportsbooks such as Caesars Sportsbook offer a robust selection of betting options revolving around Thursday’s game. Accessing all of these, as well as a plethora of promotions and odds boosts, is easy if you’re at least 21 years old and located in a state where online and mobile sports betting has been legalized. To sign up for and bet on Caesars Sportsbook specifically, you must be located in Arizona, Colorado, Iowa, Illinois, Indiana, Kansas, Louisiana, Michigan, New Jersey, New York, Tennessee, Virginia, West Virginia, or Wyoming.

Betting on the Eagles moneyline is a low-risk proposition, but at -800 odds, your potential winnings are also capped. Taking Philadelphia against a 13-point spread offers much more appealing -110 odds, and three of Philadelphia’s last six wins have come by more than 13 points. Houston has lost by more than 13 only once, but the Texans have faced four bottom-10 offenses and none ranked in the top 10. An Eagles offense that ranks third with 28.0 points per game will likely manage to run up the score unlike Houston’s previous opponents, while Philadelphia’s fourth-ranked defense (16.9 points allowed per game) should keep the feeble Texans offense in check.

Just like other top NFL betting platforms, Caesars Sportsbook offers One Game Parlays, with which you can combine various game props and players props into a single multi-leg wager on Thursday Night Football. Once the player props are revealed, which will likely be 24-48 hours before kickoff, one player to focus on will be Eagles running back Miles Sanders. He has rushed for more than 70 yards in five of the Eagles’ first seven games, while Houston’s giving up a league-high 186.0 yards per game on the ground and just allowed a whopping 314 team rushing yards in a Week 8 loss to the Titans.