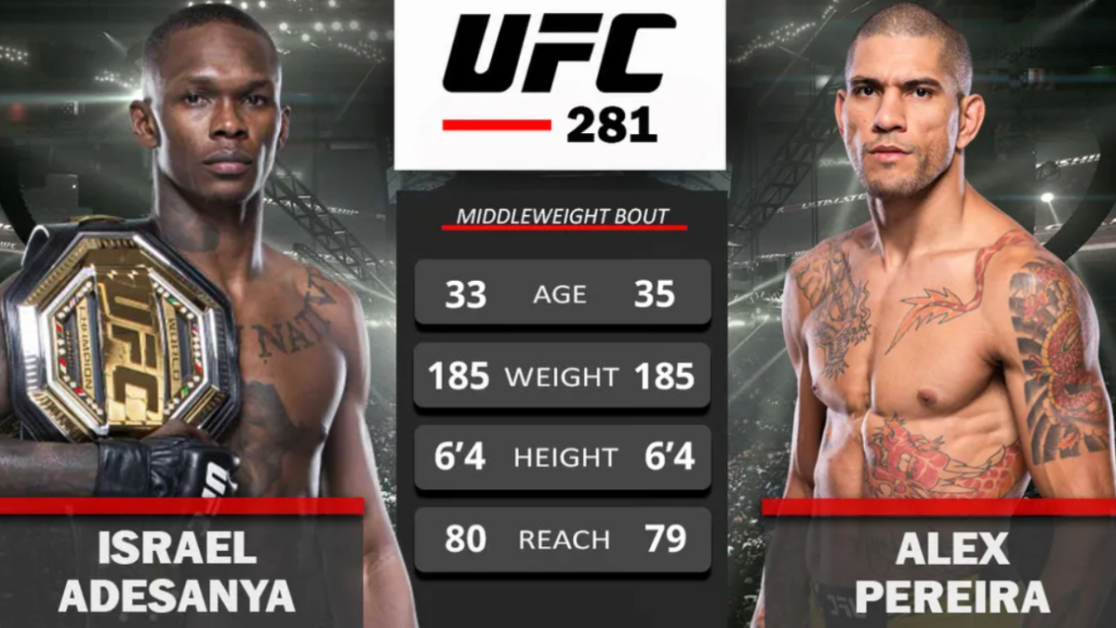 Israel ‘Last Stylebender’ Adesanya and Alex ‘Poatan’ Pereira go head to head in an exciting Middleweight title bout late Saturday evening at UFC 281. The UFC 281 Fight Card also features the Women’s Strawweight title bout between Weili Zhang and Carla Esparza, and the expected lightweight showdown between Dustin Poirier and Michael Chandler. There are also several interesting fights in the preliminary card that bettors can take advantage of. Here are the best UFC picks for UFC 281 Adesanya vs Pereira.

Adesanya can only win on points and from a distance, and he is very unlikely to knock out Pereira, and is no match for him on the ground. Furthermore, Pereira has already beaten Adesanya twice, once with a KO.

When we look at Pereira’s winning options, he can either win by points, KO, or submission. Both the fighters are the same height which Adesanay is not used to, and Pereira is much heavier, coming in to the fight as almost a Light Heavyweight. We’ve seen Adesanya struggle with large fighters like Jan Blachowich before. Pereira should win this fight confidently, as he has more going for him both standing up and on the ground.

Weili is in good physical condition, and while Esparza might have the upper hand in wrestling Zhang has been training with Henry Cejudo. Weili is going to go out with a lot of pressure and can finish the fight by her incredible kicks or with a medical decision, as Esparza bleeds quite easily.

Poirier vs Chandler Picks: Poirier by Decission at +300

This is a risky bet but should pay well

The thing to remember about this fight is that it’s only three rounds. Even though both the ‘Diamond’ and Iron Mike Chandler are going for the kill, they are quite evenly matched as fighters. Chandler however, is not active enough to take the decision, and even if both throw haymakers, it’s hard to get them out of the ring. Chandler’s taken the best shots of Ferguson and Gaethe and survived, whereas Poirier’s not been knocked out since 2016.

Gutierrez vs Edgar Tips: Gutierrez to win at -213

Gutierrez is 10 years younger, and Edgar has announced that he’ll quit after this fight. He has a weak chin nowadays and Gutierrez hits hard. The only chance for Edgar is if he takes Gutierrez down, as Gutierrez has a low takedown defence percentage at 73%.

Hooker vs Puelles Tips: Hooker to win at -165

Puelles is an up and coming fighter, but Hooker is a jump too big. Puelles’ biggest win is the upset over Clay Guida whose been on the downswing for a long time. Hooker’s latest losses have been Mackhacev and Arnold Allen. He’s still easily a top 10 fighter and this will be just too big of a task for Puelles. The only chance Puelles has is taking Hooker down, but he only has 38% takedown accuracy.

Renato Moicano vs Brad Riddell Picks: Moicano to win at -125

This is a tough fight. Moicano has the advantage on the ground, Riddell standing up. However, Moicano also has more power standing, and therefore has more options to win. Moicano is not a safe pick, but pays decent and his odds of winning the fight are around 70%

McCann vs Blanchfield Tips: Mcann to win at +300

Molly Mcann is by far the better striker than Erin Blanchfield. Unfortunately, Blanchfield is immeasurably better wrestler, and Mcann’s takedown defense is not very good. However, she and Paddy Pimblett have been training under Justin ‘Jflo’ Flores to improve their grappling, which could help her. In this fight, we’re relying on the punchers chance and think that Mcann takes this at least once out of every three times.

Petroski has never been to a decission in his life, and this fight is going to be no different. The only question here is whether he will knock Turman out or if Turman can get him to the ground and submit. We’re leaning heavily on Petroski here and think that he should finish this under 2.5 rounds, but we’ll choose ITD just to be safe.

Several US sportsbooks are offering promotions for UFC 281. If you use our exclusive BetMGM Sportsbook promo code, you’ll get a $1,000 risk free bet for UFC 281. DraftKings Sportsbook, the official sports betting partner of the UFC is also offering multiple promotions and same game parlays for the main event & other fights: