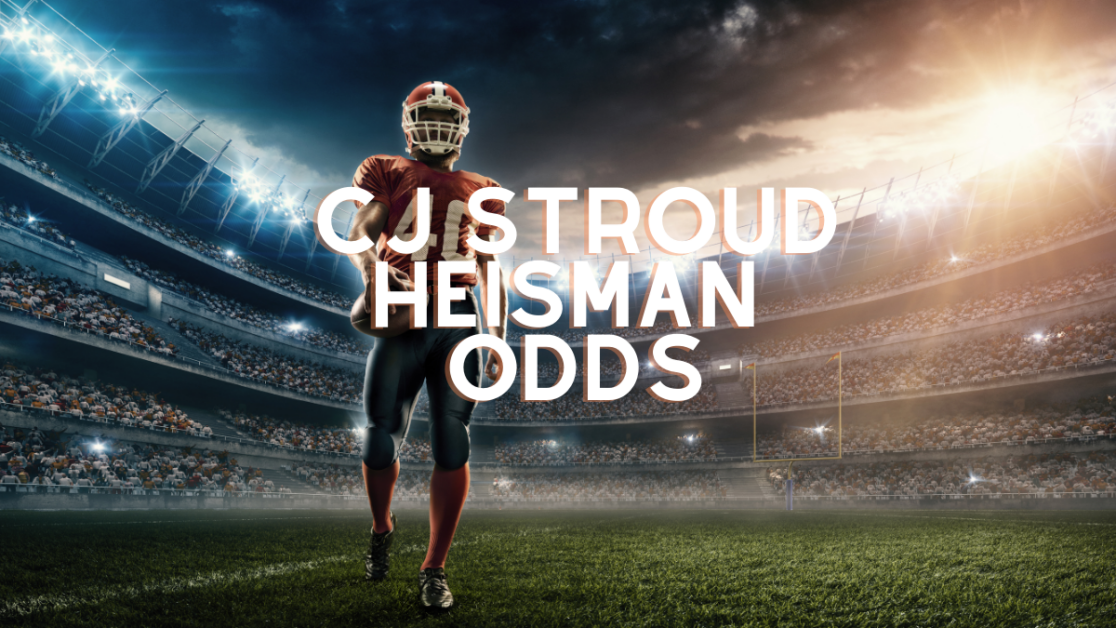 Summary
Get this bonus now Only takes a minute
21+, new US players only
21+ and present in OH. Gambling Problem? Call 1-800-GAMBLER

It’s the Heisman week and it’s looking more and more unlikely that CJ Stroud could clinch the coveted Heisman Trophy. The Ohio State Quarterback is now +4700 to win the award, which would be the biggest upset in the Heisman history.

CJ Stroud has fallen to the last place for the Heisman candidates after the divisional championship games. USC’s Caleb Williams is a huge favorite for the award, whereas Max Duggan and Stetson Bennet have also overtaken Stroud, who now has +4600 odds and an implied probability of slightly more than 2% to clinch the award.

The Heisman voting happens before the Heisman ceremony on December 10th.

How Much Can I Win Betting on CJ Stroud Heisman Odds

If you bet $100 on Stroud at the time of writing, and he makes a miracle comeback in the rankings, you’ll win $4,600 and walk away with a total of $4,700. The odds of this happening are quite low, but there’s still a chance for Caleb Williams to mess up in the college football championship. You can’t place this bet in Ohio until January 1st, but you can already claim several Ohio sports betting promos and claim free bets no deposit to bet on the College Football Playoff National Championship game on January 9.

Stroud is now extremely unlikely to claim the award. There were no big suprises in the PAC10 final game, and USC’s Caleb Williams is now a huge -2500 favorite to win the award. This implies a probability of more than 96% for Williams to clinch the award, whereas Stroud’s +4600 give him just a 2% chance.

After Ohio State week 12 loss to Michigan, Stroud’s odds have fallen to +2000. The catastrophic performance means that the Buckeye’s are out of the Championship tournament and the NCAAF Championship, while Michigan advances to then big 10 championship game. This makes it extremely hard for CJ Stroud to win the award, as most Heisman Trophy winners participatd in the big game. At the moment, the betting favorite is USC’s Caleb Williams. Other notable contenders like Tennesee’s QB Hendon Hooker have been left out of the Heisman finalists.

At the same time Volunteer’s Hendon Hooker also played strong against Missouri, but the sports betting sites still kept his odds at +300. Hooker had been the favorite the week prior, as the Volunteer’s continued their unbeaten run, but their loss to Georgia placed him firmly behind stroud alongside NCU quarterback Drake Maye (+500), Michigan’s Blake Corum (+600), quarterbacks Caleb Williams and Bo Nix (+800)

Stroud has been a heavy favorite to win the Heisman Trophy throughout the 2022 college football season as he’s been the driving force behind Ohio State Buckeye’s unbeaten 10-0 run. However, Tennessee quarterback Hendon Hooker has been just as impressive during the regular season, as the Volunteers have gone on a rampage in the SEC.

After week 9 of the season, most books had Hooker as a heavy favorite. This is the first time in the NCAAF season that the sportsbooks and oddsmakers have seen Hooker as a favorite over Stroud, but it could all change in the next few weeks.

Ultimately, it comes down to the last games of the season, where Michigan vs Ohio State could prove to be the deciding factor. If the Buckeye’s can’t make it to the Championship game, Stroud’s Heisman odds will drop significantly.

In the past years, the winners of the Heisman Trophy have almost exclusively come from the final game, but there are exceptions like Baker Mayfield in 2017. Therefore, all hope is not lost for Stroud. However, it’s quite rare that the winner would be picked outside of the top 4.

Even though Stroud’s Heisman Odds have plummeted, he’s still one of the favorites as the first choice for the NFL Draft. At the moment, he sits comfortably in the second place at +230 odds at most Ohio sportsbooks alongisde QB Bryce Young.

You can follow the live updates at CJ Stroud Draft Odds blog.

Where Will Stroud Go?

The Ohio State quarterback Stroud is a prototype of an NFL quarterback. He is 6’3 and almost 220 pounds, with room to grow. Overall, he’s a very good athlete and can run if need be. His main asset however, is his throwing arm. Even though the NFL Draft is months away, Stroud will likely be the first quarterback to go, and is high up on the first overall pick list.

Most mock drafts have the Ohio State quarterback going to the Texans, Falcons, or Seattle Seahawks. Even though Stroud’s Heisman betting is still off limits in Ohio until January 1st, you can use most Ohio sports betting apps to bet on his draft odds, as the draft happens deep into 2023.