Home > About us > Blog > NFL Owner Power Rankings – Which NFL Team Has The Mightiest Owner?

Football may be for the fans, but the NFL is as close to a billionaire’s playground as it gets, but who among this elite class of NFL owners is the most powerful of them all?

We collected data from the most reliable sources on owners’ wealth, team valuations, win rates, stadium attendance, and firing rates of head coaches to find an overall power score. Below, we’ll discuss who holds the most and least power out of the NFL franchise owners. According to our findings, the owner of the Los Angeles Rams, Stan Kroenke, is by far the most powerful NFL owner in the league right now, sitting a comfortable five points above the rest.

Kroenke boasts 95 out of 100 points in our scoring system. The Rams scored consistently across virtually all categories, including in franchise valuation and on-field results, having won Super Bowl LVI.

The next most powerful owners were Mike Brown of the Cincinnati Bengals (90), Joel Glazer of the Tampa Bay Buccaneers (80), the fan-owned Green Bay Packers (72), and Jerry Jones’ Dallas Cowboys (71).

Towards the bottom of the study, Dan Snyder and the Washington Commanders finished in last spot with 0 points.

Alongside poor financial growth and a failure to grow attendances, the Commanders haven’t exactly been a model of consistency on the field, recording a win percentage of just over 38%.

Snyder is reportedly set to sell the franchise in 2023, and recently finished towards the bottom of a separate NFL owners’ study. 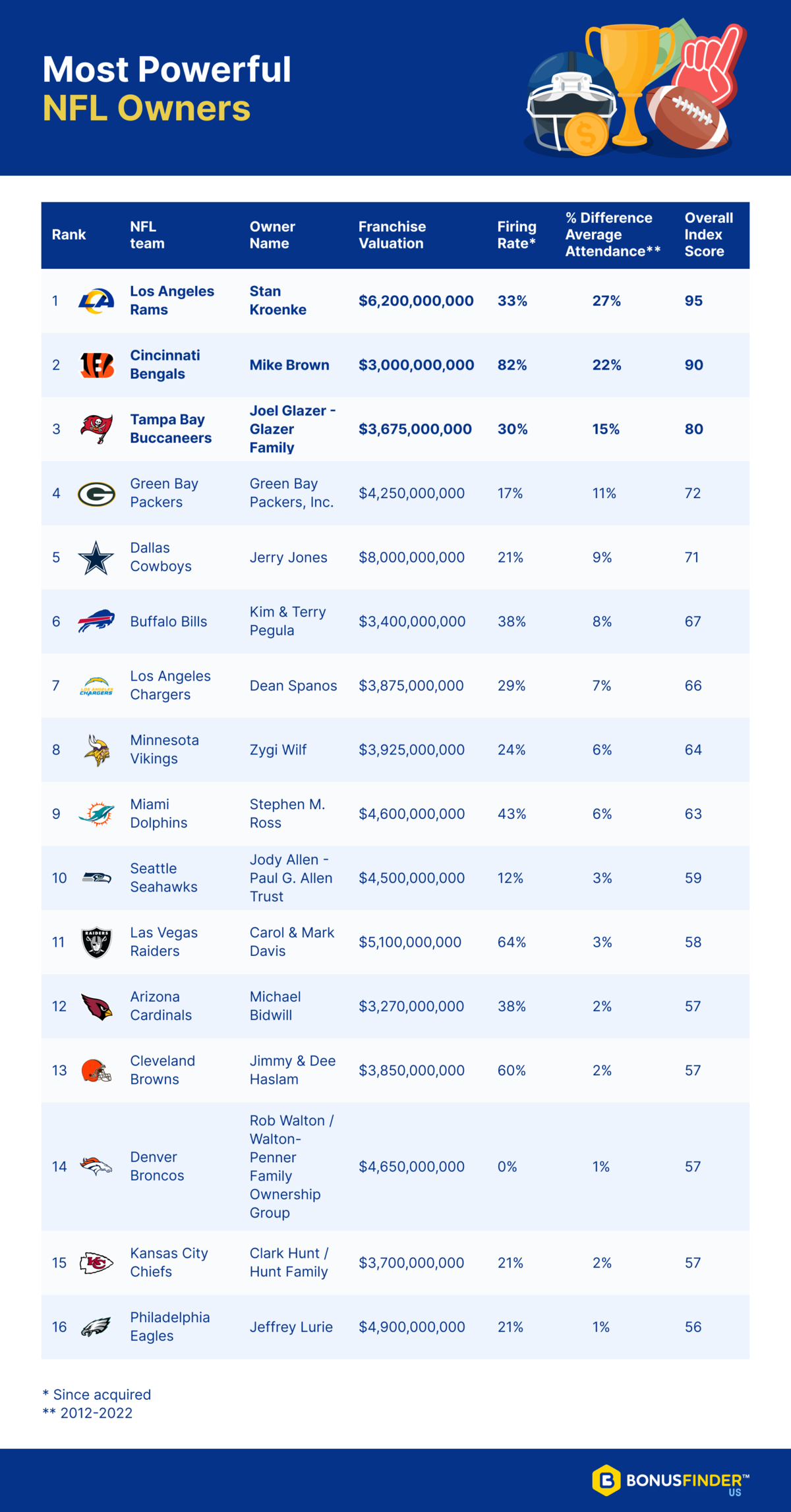 Delving deeper into the figures, and it’s easy to see why Mike Brown and the Bengals rank so highly.

Brown scored top on the average attendance increase category, with nearly a quarter (22%) more coming through the gates compared to a decade ago.

After some improved performances on the field over the last few years, and a steady increase in growth since purchasing the Ohio sports franchise in 1991, Brown is viewed as one of the more trustworthy owners in the sport.

With a high coach turnover of 82%, Brown has also shown that he isn’t afraid to showcase his authority and make changes when necessary.

That being said, with the Bengals now finding some head coach consistency and protecting assets such as Joe Burrow and Ja’Marr Chase, there is plenty of reason to be optimistic for their growing fanbase.

In a result that will further please the ‘Who Dey’ nation, they easily beat rivals Cleveland Browns, whose owners Jimmy & Dee Haslam could only muster 13th spot.

With modest scores across the board, including on-field efforts over the last decade, the Cleveland owners failed to break the top 10 in our index.

Only the Jacksonville Jaguars (28.5%) has recorded a worse win percentage since 2012 than the Cleveland Browns (33%), in a result that added plenty of damage to their final index ranking score of 57.

The Cowboys, under Jerry Jones, rank top for team valuation ($8 billion). They’re followed by Robert Kraft of the Patriots ($6.4 billion), and then top-ranked Kroenke’s Rams ($6.2 billion).

Next for team valuations, though, are a couple of upstart owners seemingly running teams more valuable than their own power should warrant.

Fourth for team value at $6 billion is the New York Giants, run by owners John Mara and Steve Tisch. Just behind at $5.8 billion is the Chicago Bears and their 20th-ranked ownership under Virginia Halas McCaskey.

These teams show that owners don’t have to be traditionally ‘powerful’ (i.e. have personal assets or be quick to fire coaches), to be successful and generate income to put back into the team.

Following these, we see a greater correlation between value and owner power, with the Lions having the least powerful owners and the second-lowest value ($3.05 billion) and the Jaguars placing as the fifth-lowest value team with Khan in the bottom eight powerful owners. 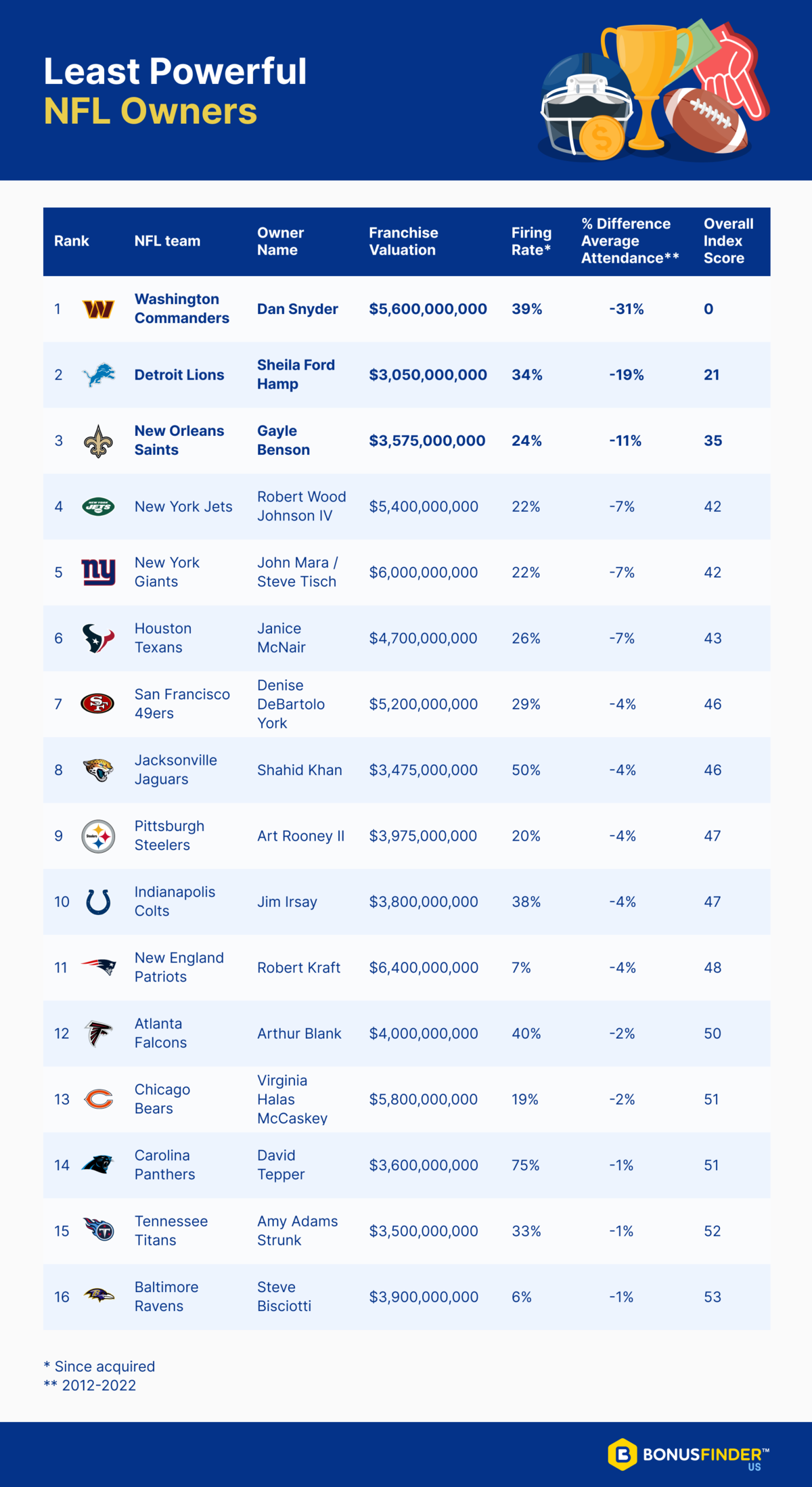 Those four teams also rank in the bottom for win percentages. The Bengals and Raiders are 19th and 20th at just over 48 percent, the Panthers’ just ahead of them in 17th, and the Browns sit near the very bottom at less than 33 percent, ranking 31st.

There is always a risk of holding on for too long with certain coaches. In the NFL, there is a clear balance between those who aren’t afraid to flex their muscles, and those who remain loyal to their man in charge, according to these figures.

As for the best win percentages since 2012, which for many teams ranges around the 60-70 percent mark, the Patriots, Chiefs, Seahawks, and Packers have top-eight owner power.

There are some anomalies, but it won’t be surprising to conclude that the most powerful NFL owners tend to run the most valuable, successful, and in the case of outfits like the Bengals, the most upcoming NFL teams.

Data collected from the NFL, ESPN, Forbes and TeamRankings on NFL teams, and their majority owners (which may be an individual or family ownership).
The owners have been ranked as most powerful (with 1 being the most powerful) based on their wealth, current franchise valuation, churn of head coaches, win rate, and stadium attendance of the past ten years.

The percentage difference in stadium attendance compared to ten years and ago, and the growth in the value of the company per year of tenure has also been included.

Each owner was given a score out of 100 based on their sporting and financial performance, along with their personal influence and assets.
The metrics included on the graphic plus any elements that were deemed more powerful than others made up the majority of the index ranking.

Teams were ranked on a scale and points were awarded based on:

The full list of metrics analyzed for the study also included: