Home > About us > Blog > Bonusfinder.com Calls On Swedish Government To Rethink Restrictions

Bonusfinder has submitted its official consultation statement for the Swedish government on the memorandum on enhanced player protections. Study shows searches for ‘unlicensed online casino’ rises 710%. 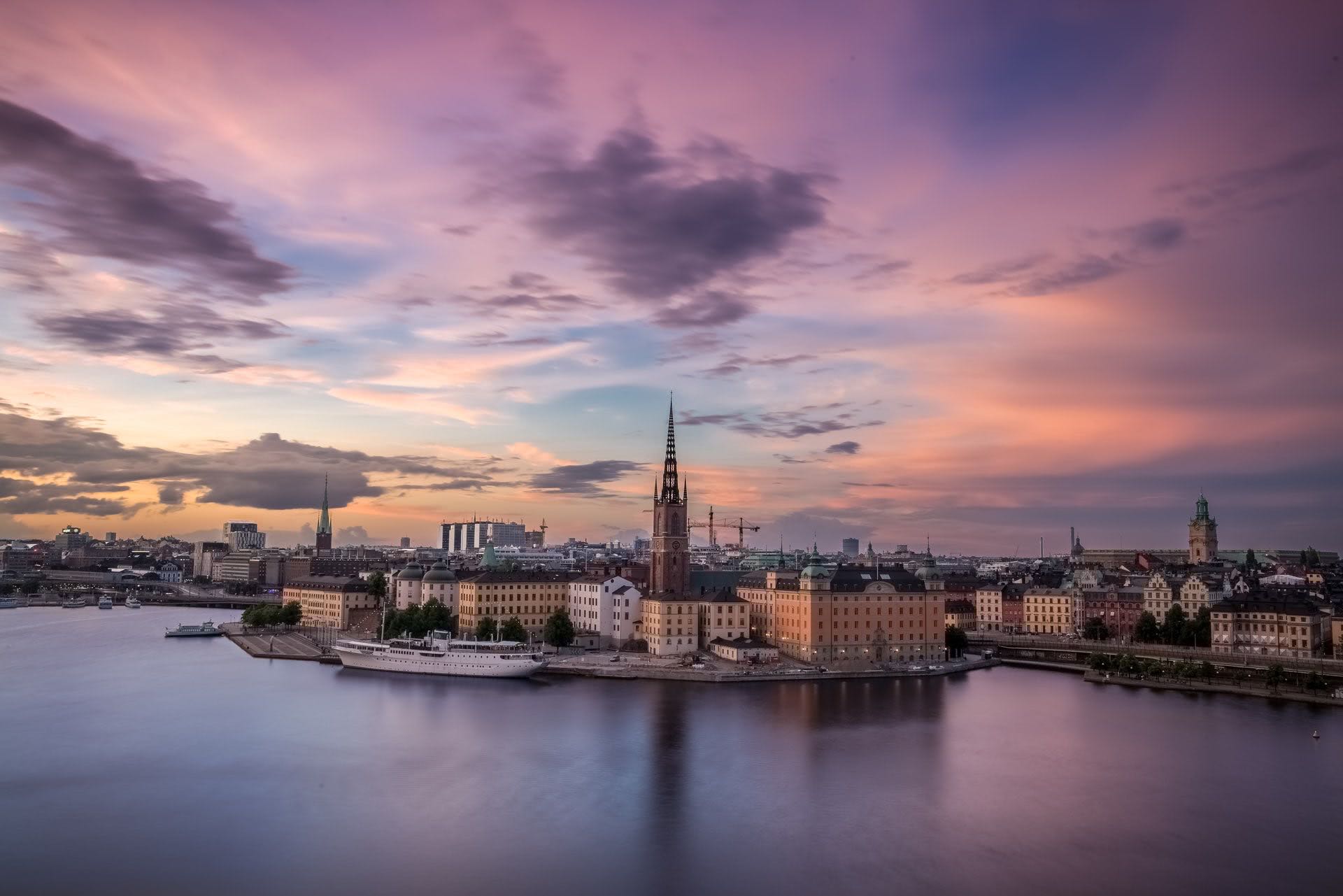 BonusFinder has carefully considered the government’s proposal and respectfully disagree with the suggested restrictions and measures on the online gambling industry. We believe they would fuel an already growing black market with more players likely to deposit funds with unlicensed sites that contain minimal tools and measures to protect players.

When the Swedish online gaming market regulated and a licensing system was introduced on January 1, 2019, it was welcomed by all serious industry stakeholders in the country. Private operators and suppliers as well as the state-owned monopoly holders were pleased to be able to compete on a level playing field and under conditions which appeared beneficial for them as well as for consumers. Sweden did a great job in thoroughly researching the best approach to legislation and heavily consulted with the industry and other stakeholders before introducing its legal framework.

But it appeared the devil was in the details as secondary legislation included restrictions such as limits on bonus offerings and jackpots which makes it hard for licensed operators to attract and retain players within the legal offering. One of the main pillars of the Swedish gambling legislation is player protection, and rightly so, however as a result of the existing regulations, a black market has inadvertently been created as players look offshore for less restrictive ways to play and be rewarded. Our own research has shown that around 30% of Swedish players currently gamble on illegal online casino sites (see research below).

Strengthening of player protection measures during the outbreak

The Swedish government has now proposed to introduce temporary measures and limits for the online gambling industry to further increase player protection as a result of the pandemic, including even stricter bonus limits, as well as mandatory time, spending and loss limits.

Although we understand these are unprecedented times and the proposal has been put forward with the best intentions to protect players, we firmly believe this will further fuel the black market and drive more players – many of them potentially vulnerable – away from legal brands to unlicensed sites.

On these sites, players will not have the same safeguards that are offered by Swedish licensees and will run a greater risk of spending beyond their means or developing problem gambling behaviours. While the new restrictions would only be in place for six months, the consequences would be felt for a longer period of time as players lost to the black market would not instantly, or very easily, return to regulated sites once measures are lifted.

Players want the freedom to play what they want without stringent restrictions on deposits, promotions, and rewards and will always look for the best offers, whether sites are licensed or not. Lawmakers must therefore ensure that any measures do not push them away from legal and responsible operators and towards unlicensed brands.

The government’s proposal would not only create a situation where players and potentially vulnerable individuals are exposed, but also damage both the short and long term financial futures of licensed operators.

The government predicts its proposed measures will only have a limited impact on operators and suppliers however, the changes would require a vast amount of technical changes to be implemented in a short space of time. For example, games would need to be altered to comply, while all advertising will need to be amended to reflect new bonus restrictions. This is not easy at the best of times, or the worst, which we are all experiencing today.

At BonusFinder, we have conducted several studies in 2020 using Google Trends data to analyse player behaviour in Sweden.

If you compare this to searches for “online casino”, which have seen a 173% increase in the period, you can clearly see the growth in demand for unlicensed gaming is rapidly outpacing the regulated sector. During our research we have tracked and identified 54 unlicensed brands that are currently actively targeting Sweden. 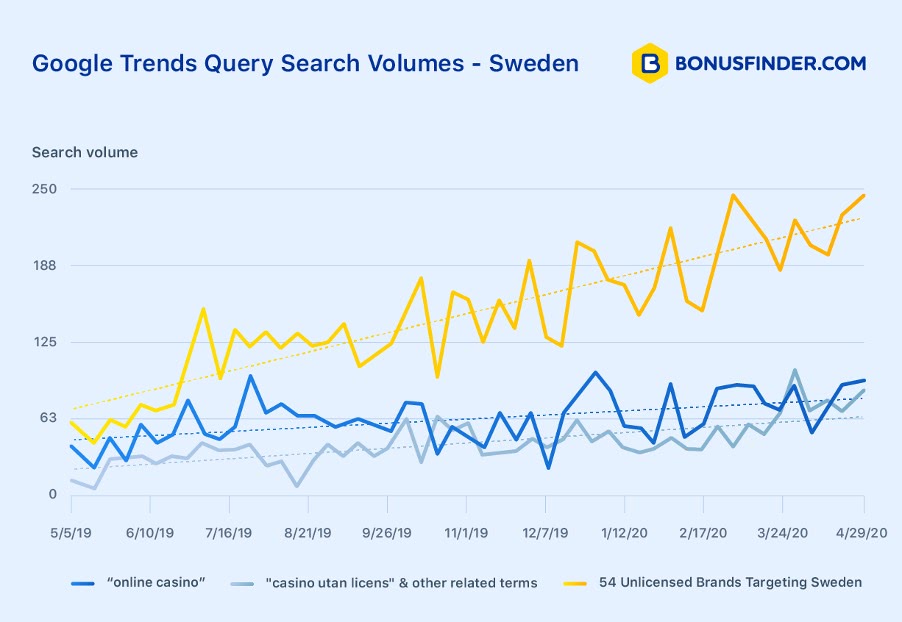 Currently the brand searches for the 54 unlicensed brands have around 2,5x volumes compared to “online casino”.

In a further study, carried out between January 2019 to April 2020, we found that almost a third of Swedish players are searching Google for ‘casino utan licens”, “casino utan svensk licens” and “casino utan spelpaus”, with growing numbers are turning to black-market brands due to the market’s restrictive gaming regulations. 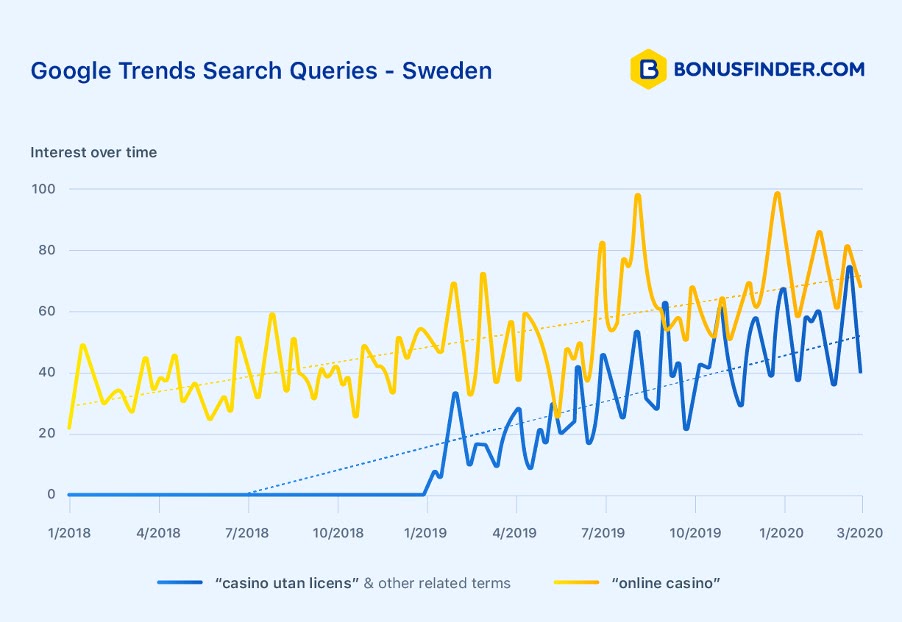 We are strongly in favour of appropriate regulation and believe that a logical and rational system with open, clear, and fair rules creates the best environment to protect consumers. We therefore find the results of our research concerning as a large number of players currently gamble with unlicensed operators outside of the legal framework and without any protection.

We fully understand the Swedish government’s concerns for its citizens in these unprecedented times, but we believe there are several alternative measures that could be put in place.

Requiring operators to increase responsible gambling messaging is key, as is ensuring affordability checks are used in conjunction with customers setting their own limits. This would give players several simple, accessible options to take ownership of their behaviour, rather than being forced to do so by regulation. By locking down time and deposit limits, players are forced towards the offshore market.

The Swedish gambling market is well regulated and has attracted many companies to operate legally in the country. The existing legislation offers one of the strongest player protection frameworks in Europe, requiring operators to enforce a number of responsible gaming measures. We believe the focus should be on ensuring these are adhered to, rather than introducing further restrictions that will only benefit unlicensed operators.

We therefore urge the government to reconsider its recent proposals, the consequences of which will be the diversion of a far greater number of players to unlicensed sites. Worse still, once this happens we believe this situation is likely remain long past the end of the pandemic and pose an even greater risk to Swedish consumers, legal licensees and the licensed market in the future.