Home > About us > Blog > Side Hustles: A Passion Project Or A Cash-Grab For Elite Athletes?

Side Hustles: A Passion Project or a Cash-Grab for Elite Athletes?

When beginning their career, many athletes may need to supplement their income by working as well as training for their dreams. But even athletes who make it into salaried sports careers like to earn extra on the side! From Shaquille O’Neal’s “burger empire” to Björn Borg’s men’s underwear line, wealthy athletes love a side gig. So, who earns the most outside of their careers? 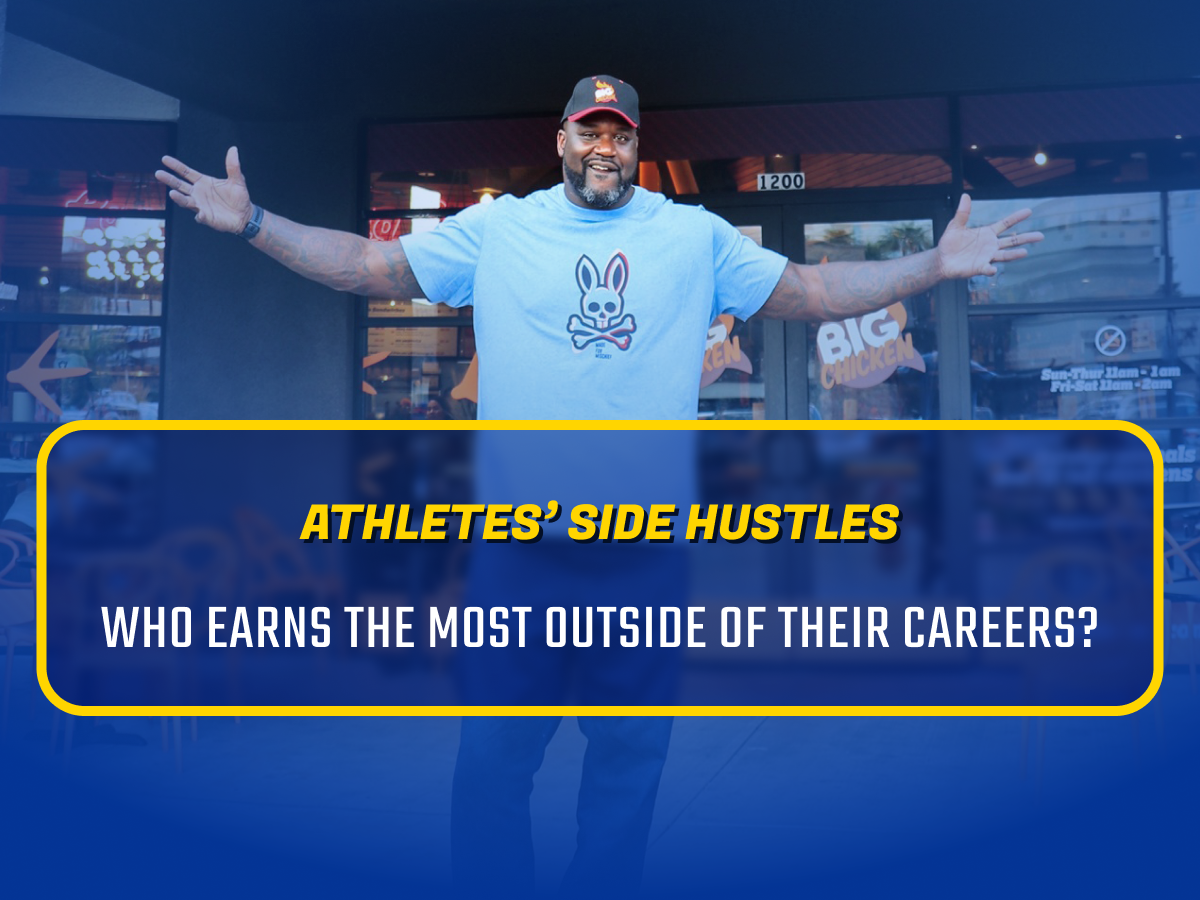 BonusFinder has investigated some of the most interesting side businesses and their revenue to rank these sporty hustlers from top to bottom.

First, What is a Side Hustle?

A side hustle is anything that makes somebody money outside of their full-time or primary career. Usually, we’d think of someone selling handmade crafts or starting a social media channel. Sometimes, side-hustles let somebody follow a passion of theirs. Otherwise, the rewards could be purely financial. The same is true for athletes, who participate in a wide range of extra-curricular earnings!

Many athletes have huge presences in the media and on social media, so it makes sense that product endorsements are often a huge part of sportspeople’s careers. That isn’t the only side hustle we’ve found, though. Some prefer to invest in organizations or projects, while others create their own brands, often in unexpected directions! 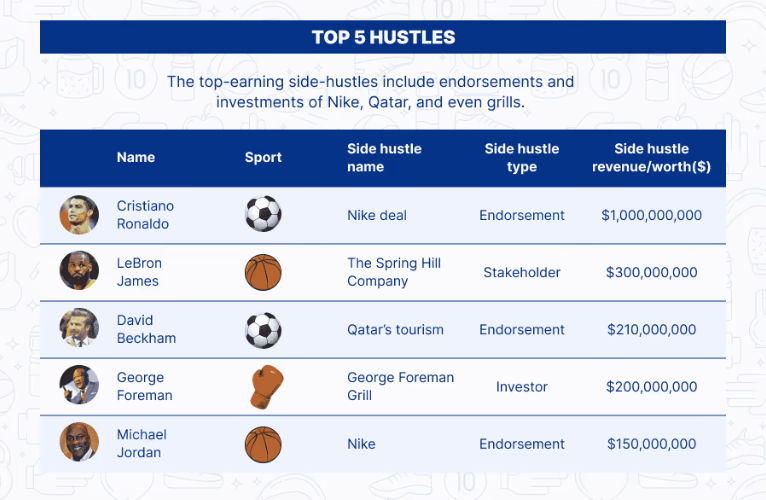 Which Side Hustles Make the Most Money?

The most lucrative side hustle just happens to involve the biggest sports brand in the world: Nike. Cristiano Ronaldo’s endorsement of the brand offers him an unbelievable $1 billion per year. Meanwhile, former NBA Superstar Michael Jordan only gets $150 million for the work he does with Nike, but he doesn’t have the same reach as the footballer who has over 400 million followers on Instagram alone. Ronaldo is the most followed person on the social media platform, so it makes sense that Nike are paying big money to keep him singing their praises!

Another basketballer is in the top five, with LeBron James and his entertainment company the Spring Hill Company. They’ve produced films such as What’s My Name: Muhammad Ali, and Space Jam: A New Legacy and Hustle. It’s clearly a passion project, which may be why it’s not as publicly discussed as a couple of the other big side hustles on our list. However, it’s not less lucrative as James makes around $300 million from the Spring Hill Company.

David Beckham has signed a contract to be an ambassador for Qatar’s tourist industry and for the upcoming Qatar World Cup. You can see him modeling in his ‘Qatar Stopover’, where he soaks in the country’s sights and speaks to some of the people who live there. All this has cost Qatar Tourism $210 million for the duration of the contract. We wonder if his flights are included…

Fourth place on the list, just above Michael Jordan’s Nike endorsement, is George Foreman. What his side-hustle is, is given away in the name! His namesake, George Foreman grills, are well known around the world. Foreman didn’t create the grills, though. They were named after him once he’d appeared in the infomercials of the grills to much success. He earns $200 million from both his endorsement of the brand and his investment in it! 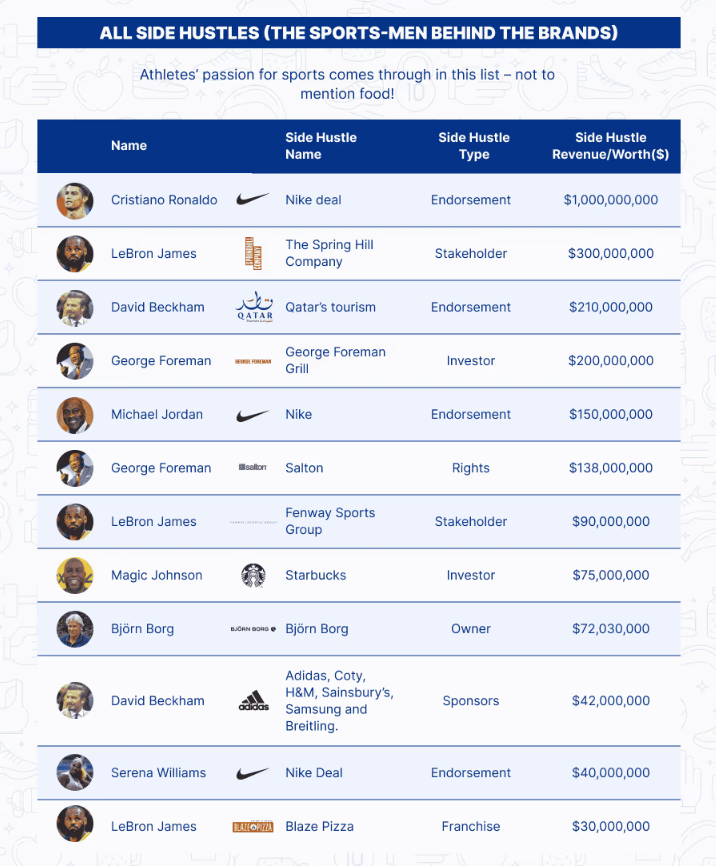 The Sports-Men Behind the Brands

Many athletes are involved or even responsible for some of the most recognizable brands.

As well as the ones we’ve just mentioned, Magic Johnson earns $75 million from his investment in Starbucks; LeBron James owns a Blaze Pizza franchise, and David Beckham is sponsored by Sainsbury’s, Samsung, and Breitling.

Of course, Nike and other sports brands are a big part of athletes’ careers, and it makes sense for them to work with the brands. As well as Ronaldo and Jordan, Serena Williams endorses Nike for $40 million. Meanwhile, LeBron James is a stakeholder of Fenway Sports Group, and Beckham is sponsored by Adidas. 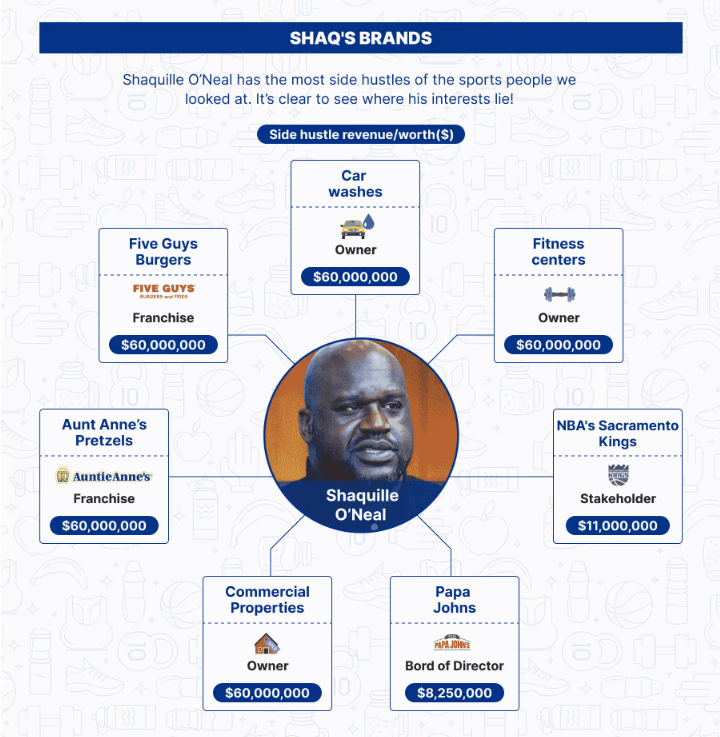 Basketballers seem to be into food and fitness, which we can get behind.

Shaquille O’Neal, for example, is on the board of directors at Papa John’s and one of the owners of Five Guys, Auntie Anne’s Pretzels, various fitness centers, and is a stakeholder of NBA’s Sacramento Kings. Out of everybody on our list, O’Neal seems to have the most and the most diverse side hustles, from which he made over $300 million. Busy guy! 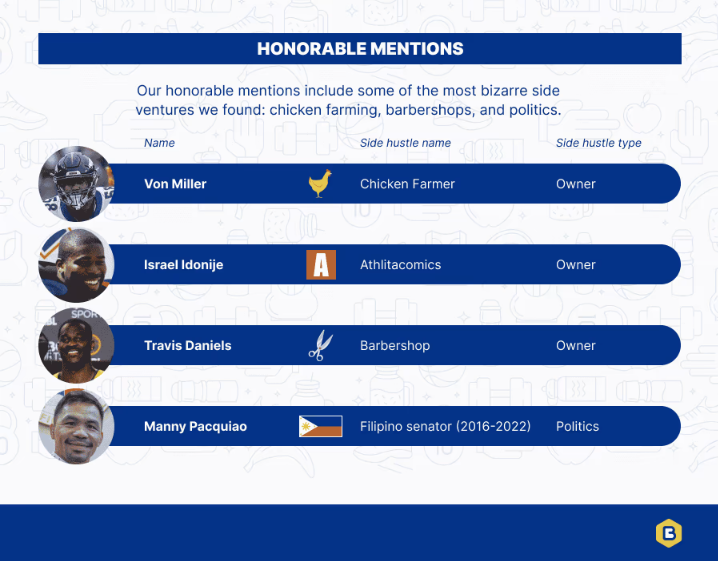 Other interesting investments include Travis Daniels, who owns a barbershop, and Israel Idonije, who owns Athlitacomics. Von Miller, who probably has the most interesting side business we’ve found, has continued his venture of farming chickens throughout his NFL career. As these are so unexpected (and seemingly less lucrative) it seems as though Daniels and Idonije have started ‘passion projects’, rather than just side-hustles.

Finally, it was a shock to most when Manny Pacquiao, one of the best boxers of the century, ventured into politics. He became a Filipino senator from 2016 to 2022, when he unsuccessfully ran for president. He only earned around $5,000 from this career change, which suggests that Pacquiao was never in it for the money!